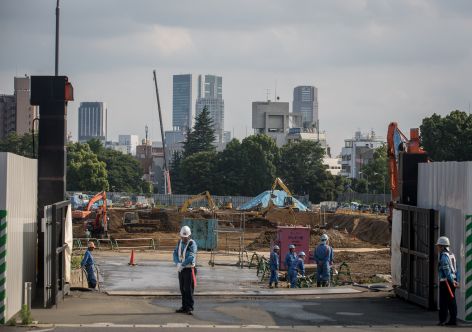 TOKYO, JAPAN - JUNE 25: Work continues at the site of the new National stadium and the planned main site of the Tokyo 2020 summer Olympics on June 25, 2015 in Tokyo, Japan. Despite heavy criticism from respected Japanese architects and a 90 billion yen price rise since Iraqi-British architect Zaha Hadid's design was originally selected in 2012. Japan announced in a report on June 24, that it will continue with construction but have altered the design in an attempt to cut costs. (Photo by Chris McGrath/Getty Images)

Lawmaker Toshiaki Endo was appointed Thursday to take charge of the Olympics portfolio with five years to go to the Games.

The 65-year-old met with Japanese Prime Minister Shinzo Abe ahead of his formal appointment. The cabinet post was created last month to give the government closer oversight of the Olympic project that has been mired in concerns about the design and funding of a new stadium for the Olympics and messy reshuffling of venue plans for a number of sports.

"The prime minister told me to keep in close contact with all the appropriate cabinet ministers, as well as the Tokyo government, and work hard," Endo said after meeting with Abe, according to Reuters.

Chief among his immediate tasks will be to help resolve the design and financing issues that have stalled the new national stadium construction. The Tokyo municipal government is at loggerheads with the national government over who will fund the venue, whose price tag has rocketed from about $1.3 billion to nearer $2 billion.

Transportation, security and delivering a competitive Japanese team for the Tokyo Games are other important priorities.

"Above all, people in the country will not be happy unless [Japan] wins a lot of medals," the former senior vice educationminister was quoted by the Associated Press.

Endo is also expected to wield some influence on the choice of new sports for inclusion in the Olympics. Eight sports were shortlisted earlier this week. Tokyo 2020 will submit its proposal to the IOC by Sept. 30.

Mori today welcomed the appointment, in a statement released to Around the Rings.

"Mr. Endo has served in several important positions within the Liberal Democratic Party, in which capacity he has made a valuable contribution to the enactment of the Basic Act on Sport, the establishment of the Sports Agency, and the passing of the Special Measures Bill for the Tokyo 2020 Olympic and Paralympic Games, and I have personally been looking forward to his appointment as minister," he said.

"I have high expectations that Mr. Endo will demonstrate his extensive capabilities towards the success of the Games.

"Tokyo 2020 will work closely with Mr. Endo and looks forward to further deepening the excellent relations it already enjoys with the national government. We will continue to collaborate with the Tokyo Metropolitan Government and all other key stakeholders as an ‘All-Japan’ team working tirelessly towards the success of the 2020 Games."