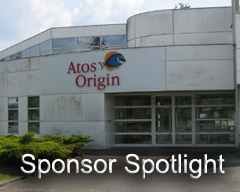 London 2012 is stocking up on sponsors as it has signed ArcelorMittal on as a tier-two sponsor.

The steel company will support the infrastructure of the Games. The announcement came as London Mayor Boris Johnson unveiled the artist and design of a new visitor attraction destined for the Olympic Park.

Turner Prize-winning artist Anish Kapoor has been commissioned to deliver the artwork costing $29 million, which is to be called "The ArcelorMittal Orbit".

The 115m sculpture, set to be Britain's largest piece of public art, will consist of a continuous looping lattice of tubular steel.

The sculpture was commissioned by Johnson and Olympics minister Tessa Jowell. It is part-funded by steel magnate Lakshmi Mittal, chairman and CEO of ArcelorMittal, which will contribute $24 million to build the sculpture. The London Development Agency will provide the rest of the finance.

"We set out to create a transformational piece of art that will be an iconic symbol for the Olympics and also a new landmark that will endure long after the Games themselves," Mittal said.

The attraction will stand in the southern part of the Olympic Park between the stadium and aquatics center and be open in time for the 2012 Olympics. Post-Games, the Olympic Park Legacy Company will take ownership and run the visitor attraction.

TOP sponsor Atos Origin says its operations at the 2010 Vancouver Winter Paralympics were a success.

"The transition to and implementation of our IT systems for the Paralympic Winter Games went smoothly thanks to our dedicated and talented technology team and numerous volunteers," Patrick Adiba, Atos Origin’s Executive Vice President Olympic and Major Events, said.

The IT Partner managed and secured the IT infrastructure for the Paralympics March 12 through 21.

AO used the same technology as it did for the Olympics.

The company implemented the Olympic Print Distribution, which provides print outs of Games information, for the first time for the Paralympics.

Atos Origin has been involved with the Paralympics since 2002.

More than 1,200 CEOs attended the launch of Club 2018 in support of the Annecy bid for the Winter Olympics.

Club 2018 encourages small and medium size businesses to support the French bid. It is open to all companies in and outside of France.

Club 2018 is not part of the official marketing program for the bid. Club 2018 companies will not be listed as a sponsor, but they will receive ad space on the bid Web site and other benefits.

Annecy is competing for the 2018 Winter Games against Munich and PyeongChang. IOC members will select a host city in 2011.

During the Club 2018 launch ceremony, French Minister of Health and Sports Roselyne Bachelot told the crowd that the government will invest $4.7 million into the bid.

"It is the state’s duty, along with the financial partners and the athletes, to uphold this magnificent bid project," she said.

Munich 2018 says five new sponsors announced Tuesday will be known as Friends of the Bid.

These small and medium businesses include APA Group (advertising), Autobus Oberbayern (transport), Drees & Sommer (property), the Munich and Upper Bavaria Chamber of Trade and Industry and SporthausSchuster (sports retail). These companies join BMW, Lufthansa and adidas as sponsors of Munich 2018.

Each deal is worth about $40,500 according to media reports. Munich 2018 hopes to reach 50 such agreements.

"Support for the bid from the SMEs is of special importance, both professionally and financially," Munich 2018 CEO Willy Bogner said. "It clearly demonstrates that regional businesses are totally supportive of our bid. They are demonstrating how much they want the Olympic and Paralympic Winter Games to come to our region."

Key issues and market trends in sports sponsorship will be among the topics at one session during the SportAccord in Dubai April 25-30.

The panel takes place on April 28, the first full day of SportAccord.

"These industry leaders will be able to give top-level insights on how sponsors and sport can work together to achieve effectivepartnerships that last for many years," Anna Hellman, executive director of SportAccord Convention said.

The annual SportAccord Convention is being held for the first time in a Mideast city.

The International Archery Federation, FITA, has extended its partnership with Turkish Airlines until 2011.

Turkish Airlines will transport officials, athletes and fans. The airline also will allow athletes to carry 12 kg of extra luggage for free.

Turkish Airlines became a sponsor of FITA in 2006 during the start of the Archery World Cup.

"In recent years, the airline has become a major player in aviation and also in sports sponsorship," FITA President Ugur Erdener said.

"In archery, we are extremely thankful that Turkish Airlines not only supports us, but also all our athletes who travel to competitions."

The airline is also a sponsor of Barcelona FC and Manchester United.

…The 2010 Alltech FEI World Equestrian Games will get extra promotion when Yellow Cab wraps four taxis in Lexington with its logo. The cabs also will have ID numbers that represent the Games, 8,25, 10 and 2010. The numbers represent the eight disciplines at the competition, the start of the Games Sept. 25, the end of the Games Oct. 10 and the year.

…Corporate Accountability International is asking TOP sponsor McDonald’s to retire its mascot Ronald McDonald, according to Ad Age Daily. The company says that the mascot should be in retirement instead of "targeting children with deadly products," on its "Retire Ronald" website. McDonald’s said in statement its "beloved brand ambassador" sends messages about "safety, literacy and the importance of physical activity."

With reporting from Isia Reaves