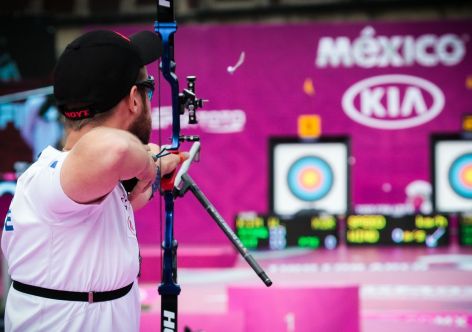 (ATR) Competitors are nearing their medal aspirations at the 2017 World Archery Championships as quarterfinal matches resume on Oct. 19 in Mexico City, Mexico.

Archers from 61 countries began their quest for a world championship title on Oct. 15 in the men's and women's disciplines of compound, recurve, team compound, team recurve as well as mixed teams in compound and recurve.

October 20 is reserved for the mixed team events ahead of the medal matches over the weekend in Mexico's capital. All of the qualification and elimination events are taking place at Campo Marte, the venue of the equestrian competition at the Mexico City 1968 Olympic Games.

World Archery hopes the championships will continue the federation's efforts to grow the sport in the Americas. The World Championships follow the 2015 Archery World Cup final also held in the capital, the country’s second time hosting the World Cup final.

"Athletes were at the centre of the decision to award these events to Mexico City," World Archery secretary general Tom Dielen said. "Mexico’s archers have been asking for an international tournament in their country for some time, and they are one of the most internationally competitive teams right now."

The week-long tournament on Oct. 22 with the recurve finals in all disciplines, following the finals of the compound events on Oct. 21.

The U.S. National Governing Body for rowing receives its fourth annual contribution from the U.S. Department of Veteran Affairs to support and develop community rowing programs.

USRowing was awarded $250,000 in an Adaptive Sports Grant to support the Freedom Rows programs throughout the country. Freedom Rows was developed in 2014 to provide an outlet for disabled veterans and members of the armed forces to participate in sport when they return home.

Since its inception three-years ago, Freedom Rows has grown from six to 30 programs with an annual average of 1,000 veterans participating.

The grant supplied by the Department of Veteran Affairs is part of larger contributions of $8 million by the department to 96 organizations in 33 states in 2017.

"We are honored that USRowing received the second-largest grant awarded to a single-sport National Governing Body and attribute the incredible work of the Freedom Rows program leaders and volunteers at USRowing member clubs and VA medical facilities throughout the U.S. for our continued success," said USRowing Adaptive Programs Development Specialist Deb Arenberg.

"Rowing is uniquely suited to veterans, as it provides a support system that involves team effort, mutual trust, dedication towards a common goal and an ethos that veterans are familiar with from their service training.

"For some rowers, returning to their pre-injury level of fitness, getting back on the water, or even just leaving their house for the first time since they were injured are major milestones."

Ji was appointed to the role on Oct. 17 due to his role in supporting the ITTF in the past two years as chairman of Seamaster. Seamaster is the title sponsor of the ITTF World Tour and is a strategic investor in the ITTF’s new discipline, Table Tennis X.

The Seamaster chairman is also heavily involved in creating new products for the ITTF, including his work to develop the T2 APAC table tennis league that began in 2017.

"Together with my company Seamaster, I would try my utmost to contribute on the development of table tennis and make our sport more energetic and exciting to draw more younger generation into the game," Ji said in a statement. "I hope Seamaster could strengthen the collaborations with the ITTF in different aspects, including with T2 in a more commercial way."

Weikert and Ji will hold their first official meeting in December during the Seamaster 2017 World Tour Grand Finals in Astana, Kazakhstan. Weikert says he looks forward to their continued and more in-depth collaboration.

"I would like to personally thank Frank for his commitment, passion and belief in table tennis and the ITTF over our fruitful relationship over the last 24 months," Weikert said in a statement.

"Frank is a business visionary, and I could not think of a better person to be advising me on how to develop ITTF’s commercial and business interests in his new position. I look forward to our relationship flourishing more and together taking table tennis to new heights."