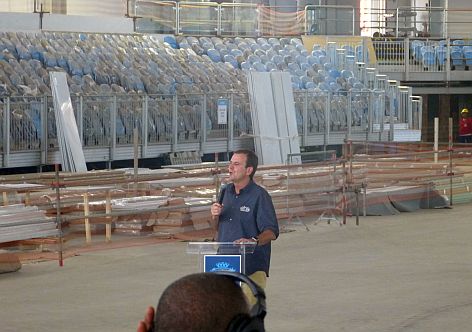 (ATR) Rio de Janeiro Mayor Eduardo Paes tells Around the Rings he could never have imagined the transformation in the city in 2009 to the eve of the Olympic Games.

"I think Rio is going to be a benchmark in [Olympic] legacy," Paes told ATR.

"I want to do better than Barcelona did, and I think the city is moving that way because of the Olympics."

Paes says that the 2016 Games will be remembered in the history of the city because Rio managed to deliver more infrastructure projects than originally promised to the IOC in the bid book. A total of 150 kilometers of Bus Rapid Transit highways are being built for the Games, and the city is currently installing 20 kilometers of a new subway line.

The mayor also called the current renovation of the Porto Maravilha in downtown Rio one of the "biggest urban renovation projects in the Western World."

"We didn’t promise that much, so I think it is different than normal politics when you promise too much and don’t deliver half of it," Paes said.

For Rio de Janeiro, issues over the water quality of Olympic venues at Copacabana Beach, Guanabara Bay, and the Lagoa de Freitas remain as the city makes a last push to prepare for hosting the Games.

Thomas Bach said at the 2015 IOC Session in Kuala Lumpur that the IOC would continue to monitor the pollution in the waters of Rio, while leaders from triathlon, rowing, and the IOC have ensured the athletes will be protected.

Mayor Paes believes that the issue is overblown, and that Rio de Janeiro not reaching a goal of treatment of 80 percent of raw sewage reaching the bay "has nothing to do with the Olympics."

"It would be good if we had a final solution for this problem, which is an everyday life problem in Rio.Unfortunately, we didn’t. Although, the quality of water ... is better because of the investments we’ve made because of the Olympics. For the Games, it is not something that worries us."

Paes says that the citizens of Rio have taken to the Games, despite the city not going out and putting on the "look of the Games" yet. He says polls show that 75 percent of citizens are in favor of the Games, a number that "will rise" as the Games get closer, and that next year the Olympics will be "a Games of celebration."

"It is such an incredible city with such warm people," Paes said.

"Everyone that will come here will feel it. It will be amazing. We are very warm and know how to get things done."