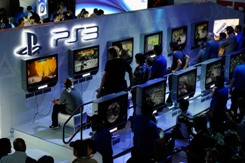 CEO and chairman Raymond Goldsmith tells Around the Rings that games will be released on new platforms in reaction to big changes in his industry.

"There is a social phenomenon going on in the world at the moment – given the social games, tablet and other smartphone devices – which has caused a huge explosion within the Games industry," says Goldsmith.

"It has driven the market into new areas, new age groups (and) new socio-demographic game players, particularly females, and the Olympics has recognized that we in turn need to be a part of that movement."

Beginning in November, publishers will release a series of Olympic-themed games for virtually every platform from Xbox 360 to mobile phones to web browsers.

"Mario and Sonic at the Olympics Games" hits stores Nov. 18 and is featured as part of a special edition blue Wii console bundle in European markets.

For the first time ever, there will also be a Facebook game in which people can build an Olympic Park online.

ISM will work with sponsors to give away real-life prizes for winners. From the social media experience, participants will earn coupons that they can take to nearby stores to redeem.

Each prize will be adjusted to the participant’s location, says Goldsmith. "A prize that might be desirable in Australia might be very different in America," he adds.

His company will also work with Olympic sponsors and National Olympic Committees to create "minigames" or simpler, flash-based games for free that can be played through a web browser.

Goldsmith says these initiatives benefit the sponsors and NOCs but also allow ISM to promote their other products like multisport interactive videos or the character-based Mario & Sonic game.

"It creates greater awareness of Olympic software and helps build the franchises to consumers that we hope will then go on to buy the multisport or the character game."

Since 2006, ISM has been building its mobile phone and tablet products. London 2012 will only build on this expansion, Goldsmith says.

Despite all this growth, he adds that profound challenges remain. With the influx of social media, people can find more games for free and have become less willing to pay for entertainment software.

Producers have dealt with this dilemma by offering games that are initially free but then charge players if they want to continue or get additional features.

Expanding into a new demographic, ISM is targeting five- to eight-year-olds with Olympic-themed video games. Goldsmith says the games will mostly focus on education.

Video games have long been critiqued for keeping children in front of a screen and inhibiting them from being active. Goldsmith says he is well-aware of this argument, especially in the education sector.

"A lot of people have a very negative view about video games," he says.

"On the other hand, they have to understand that if you want to communicate with youth, you’ve got to be in their space. They’re not going to come in yours."

Goldsmith explains that with Olympic-themed video games, children are exposed to a greater variety of sports like archery.

Young people would always be attracted to video games, he adds.

"If they don’t play an Olympic video game, then they’re going to play someone else’s."