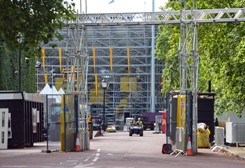 "The federations are in great shape. It is fantastic to have them here. It's just really exciting to see the venues come to life, to see the look go in," she told ATR at the Hilton Park Lane hotel.

"What's really exciting for me is that the athletes are now training at those venues."

Asked if federations had raised any concerns about particular venues, Jevans said: "None whatsoever.

"The technical delegates are now starting to arrive, looking at them ... everything from Greenwich [Park] to the handball arena to the velodrome, they have been all over.

"We are in really good shape. The fields of play are fantastic and that's what's really important."

LOCOG and architects Populous have scrambled to get the temporary 15,000-seat beach volleyball venue at Horse Guards Parade finished in a six-week build after the Queen's Diamond Jubilee celebrations.

Fitting out the ExCeL exhibition center, which will host seven Olympic sport competitions during the Games, has also challenged London 2012 sport and venue chiefs.

"They were last minute, but it's what we anticipated. We got them on the date we thought we would so we had the build schedule in place to get them ready - and they are," Jevans explained.

Smiling and looking confident in London 2012's final sport and venue preparations, Jevans said she was "very excited" about the sport competition getting underway.

Great Britain's women's football team take on New Zealand at the Millennium Stadium in Cardiff, Wales on Wednesday - the first action of the Olympics.

Jeff Keas, head of the Olympics overlay team for architects Populous, said his team is spending the days before the Games "fine-tuning" venues.

Populous, which designed the 80,000-capacity Olympic Stadium, has worked on overlay for 35 competition and 125 non-competition venues.

"They are all buttoned up - and they had to be. That was all part of the plan. It's all gone exactly to the program," he told ATR. "They are basically there and ready to go ... athletes are training at Horse Guards Parade."

Keas said athletes were also using a separate training venue next to the 15,000-seat competition facility.

Building a temporary venue equivalent in size to Wimbledon's Center Court for the annual tennis championships was quite an undertaking.

"It's very big and was on a very tight build program," Keas said of the six-week effort to get the beach volleyball facility finished.

Keas said the beach volleyball venue will truly showcase London's famous landmarks - and claimed it would set the benchmark for future Games.

While the lower seating bowl of the volleyball venue is complete "to give atmosphere for the athletes", the upper tier is three-sided.

"It opens up Horse Guards Parade with views to the rest of London ... Big Ben, the Houses of Parliament, the Shard.

"We are really excited about that for spectators and the TV viewing audience," he added.

Keas hailed LOCOG's sustainability drive that has guided the design and build of its permanent and temporary Olympic venue constructions.

"The big win is the lifecycle cost," he said, explaining the huge savings on maintenance and operating costs that come with the use of temporary buildings for an Olympics.

"We feel this will redefine how Olympic venues are built in the future. I think more and more cities will do this."

Reported in London by Mark Bisson