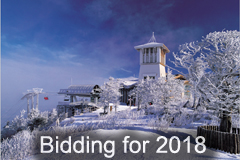 Despite an emergency meeting Wednesday, senior Annecy 2018 bid officials have yet to decide on a new CEO to replace Edgar Grospiron. A bid spokeswoman tells Around the Rings no appointment will come until at least next week and possible early January.

Candidates for his replacement were discussed at the Paris meeting. At the press conference that followed, senior bid officials were paraded in an effort to show unity.

Earlier this month, Drut and IOC colleague Jean-Claude Killy were critical of the international PR strategy taken by the bid.

"These were remarks, this was no lynching," Drut was quoted by Reuters. "We are not the favorites but nothing is done yet."

In a bid statement released today, Drut said his own and Killy’s commitment was "total and absolute in support of Annecy".

Confirming that Annecy was not about to quit the bid race, Jouanno restated comments made in the immediate aftermath of Grospiron's resignation on Sunday.

"Impossible isn’t French. It’s a matter of national commitment. The state is 100 percent behind the bid," she said. "We have six months to do an excellent job. If there's a clear strategy, we will find the resources to make it happen."

Masseglia spoke of the determination to succeed of all those involved, especially Annecy 2018's athlete ambassadors:

"Everything is still to play for. It’s an excellent bid, which brings us all together. We always wanted it to be led by athletes, and we intend to give it an even stronger identity through our champions, who are ambitious and fully committed."

Grospiron quit Sunday after the bid's supervisory board failed to grant his demands for a 12 million euro increase in the bid budget. He claimed more money was needed to stay competitive with rivals Munich and PyeongChang in the seven-month international PR push to the IOC vote in July.

Count German president Christian Wulff as Munich 2018’s latest supporter. The bid announced on Wednesday that Wulff was one of several prominent politicians who will take "active steps to back Munich's bid to host the Olympic and Paralympic Winter Games in 2018."

Wulff’s announcement came before a multi-party signing agreement to support the Olympic bid.

"Sport possesses an enormous capacity for integration" he said. "Sport connects people and transcends cultural boundaries. Sport strengthens values, like team spirit and respect. Hosting the Winter Games would be a great honor and an opportunity for our country to welcome guests from all over the world. I support the bid from Munich, Garmisch-Partenkirchen and Königssee to host the Olympic and Paralympic Winter Games in 2018 and I will continue to promote it internationally."

"The Munich bid for the 2018 Olympic and Paralympic Winter Games is a matter of national importance" Merkel said.

"The Federal, state and local governments share a common vision and are committed to promoting and supporting Munich 2018."

Thomas Bach, president of the German Olympic committee said: "every echelon of German sport is determined to bring the Winter Games to Munich in 2018…The signatures on the agreement serve to demonstrate to the world the desire we have to host the 2018 Winter Games."

Lillehammer, Norway is the only candidate bidding to host the second edition of Winter Youth Olympic Games. Deadline for cities to apply to the IOC was Dec. 15.

The IOC says the file will be analyzed and that an Evaluation Commission will be formed to review the bid in 2011.

Regardless that the bid from Lillehammer is the only one for 2016, IOC members will still vote no later than October 2011 on whether to award the event to the host of the 1994 Winter Olympics.