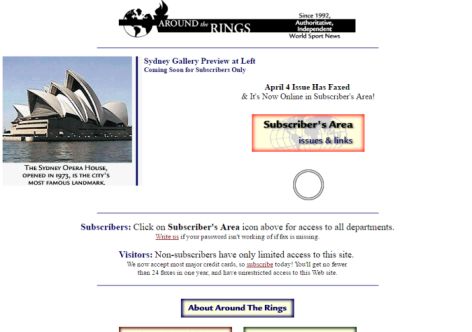 (ATR) Launched in December 1996, Around the Rings was the first online only publication to receive Olympic accreditation. ATR Editor Ed Hula was the first dedicated online journalist accredited as a member of press when he covered the Nagano Winter Games in 1998.

In the beginning, ATR was still primarily a fax publication but after Nagano faxing became too expensive and the decision was made to switch to email distribution. ATR became one of the first newsletters distributed through email.

"We really did not know what to expect from a website in December 1996 when we launched www.aroundtherings.com," explains founder and editor Ed Hula.

"Internet content was in its infancy. Newspapers were still a big deal. People watched video on TV, not smart phones. We have watched the media change and with it the maturation of the way we deliver ATR to the world," Hula says.

In 1996 ATR would send out updates once a week or so. Now there are numerous updates daily, more than 4,000 in 2016. Features introduced over the years include a press release section, ATRadio, Golden Opportunities and the Golden 25. There have also been several website design changes.

In 2009 ATR’s sister website worldfootballINSIDER was launched. Around the Rings Japan was introduced in 2015.

The growth of ATR has meant a team of one has expanded to a worldwide staff of journalists over the course of the last 20 years In Rio de Janeiro, the staff numbered nine, with support from the Atlanta headquarters. Currently ATR has correspondents in the United States, Great Britain, Germany, the Czech Republic, Japan, Australia and Canada.

Since the Nagano Olympics, Around the Rings has operated offices in the Main Press Center at every Olympic Games,

ATR remains on the leading edge of Olympic news websites. A recent survey showed Around the Rings correspondents demonstrated a strong social media following, with three of ATR's reporters ranked in the top 10 most followed journalists by sports federations. Editor Ed Hula is the second most followed journalist throughout the Olympic Movement.

Subscribers should expect a number of enhancements and improvements in 2017 as ATR’s website enters its 21st year and ATR itself celebrates 25 years as the number-one source of Olympic news.