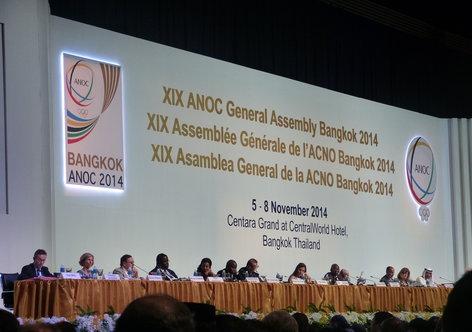 Ahmad was elected by acclamation at the 2014 ANOC General Assembly in Thailand. He had been serving a partial term after taking office in 2012 after the resignation of Mario Vazquez Rana.

"Thank you all for you trust, and I hope to continue working with you" Sheikh Ahmad said after the vote.

The term for both positions will run to the ANOC General Assembly in 2018.

Represented at the General Assembly were 203 National Olympic Committees presidents, with only the United States Virgin Island absent.

At least five women will now serve on the ANOC Executive Council each term.

The first amendment, as explained by ANOC Judiciary Commission head Michael Chambers will require all five continental bodies to give ANOC President Sheikh Ahmad a list of female candidates for him to appoint to a spot on the Executive Council.

That means that one woman from each continent will have an assigned, automatic spot on the council.

A second amendment also passed that allows women to be elected to the Executive Council through continental association elections.

"The fact that one is going to be appointed by the Sheikh does not mean that women are not fully qualified to be elected as part of your group to the executive council," Chambers said.

ANOC in the Black

The Association of National Olympic Committee has money to spare.

Finance Commission chair Richard Peterkin said that the operating budget for the organization was less than anticipated, which led to $7 million in reserve funds.

Those funds have been invested, and a total of $11.5 million dollars was reported in ANOC bank funds.

The delay in completing construction for the ANOC headquarters in Lausanne freed up the money.

Over the 2013-16 quadrennial ANOC received $68 Million from the IOC. A $12 million annual subsidy comprises the yearly operating budget, while a $20 million grant served as the funds for renovating the headquarters.

For 2015 the budget for the ANOC General Assembly has been increased to $4 million, and the budgets for International Forums was decreased.