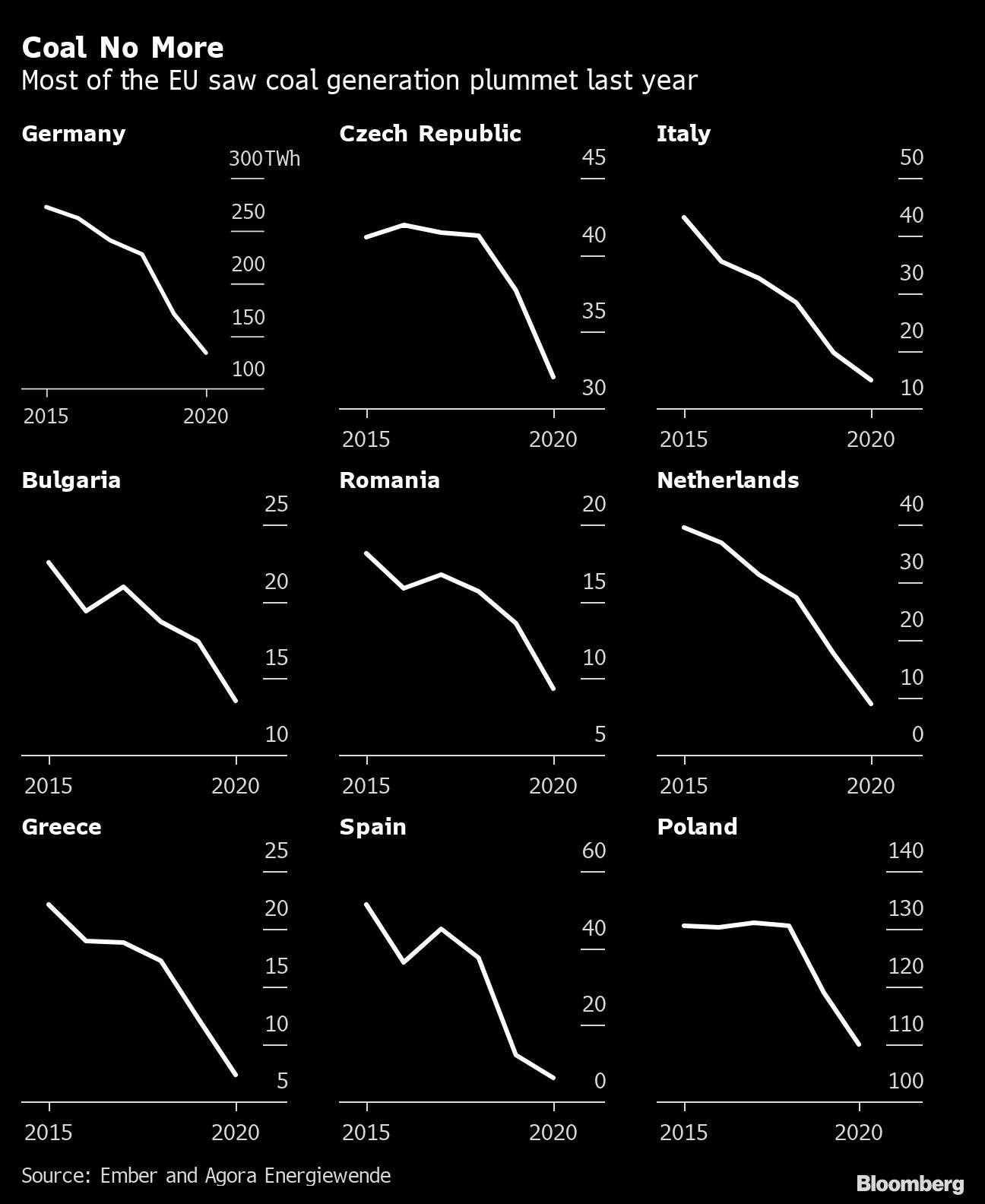 (Bloomberg) -- Renewables are for the first time the dominant power source in Europe’s electric grid.

In a year that saw pandemic restrictions sap energy demand across the continent, the drop in supply came mostly from more expensive power from fossil fuels. That helped green sources take the biggest share of the European Union’s generation, a portion that will keep growing as the bloc moves to achieve its climate goals.

The trajectory is likely to be steep. Europe needs to double the share of electricity produced from renewable sources by the end of the decade to have a chance of meeting a stricter target of reducing emissions at least 55% by 2030 from 1990 levels, according to a report last week.

Renewables produced 38% of the EU’s electricity in 2020, up from 34% in 2019. That was just enough to surpass fossil-powered generation for the first time, which dropped to 37%, according to analysis of grid data by research organizations Ember and Agora Energiewende. The report adds to data that showed last year was the greenest ever for British power generation.

“At the start of a decade of global climate action, it is compelling that Europe has reached this green power tipping point,” said Dave Jones, an electricity analyst at Ember and the lead author of the report. “Rapid growth in wind and solar has forced coal into decline, but this is just the beginning.”

Wind and solar generation increased about 10% compared to 2019. Coal production fell 20%, to about half the level it was five years ago. Gas generation fell as well, about 4%, but was still 12% higher than the median gas generation of the last 10 years.

The shift away from coal has brought down the carbon intensity of Europe’s power by 29% in the last five years. That could accelerate if the EU is able to expand its decarbonization efforts and replace gas with renewable power.

That intensity could have been even lower had it not been for a decline in the bloc’s nuclear power sector. Generation from nuclear power plants dropped 10% in 2020, the biggest decline in at least 30 years. French and Belgian plants suffered from outages and a couple large nuclear plants were closed in Germany and Sweden at the end of 2019. Low-carbon nuclear generation will continue to fall as some countries phase it out from their electric grids.