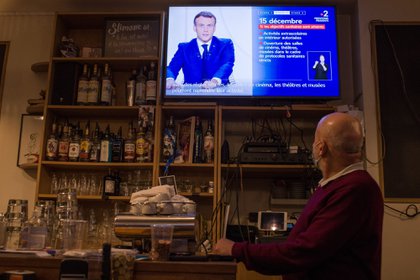 Frances President Emmanuel Macron speaks during a live televised address on easing lockdown measures in a closed bar in Paris, France, on Tuesday, Nov. 24, 2020. Macron said he will gradually lift a nationwide lockdown this month, as he attempts to avoid a resurgence of the coronavirus and damaging fits and starts for the economy. Photographer: Nathan Laine/Bloomberg

Doctors and researchers are raising the alarm as new, more contagious variants of the coronavirus are circulating in France and the prime minister hinted on Monday that tougher measures might be needed to try and stop it.

“There are decisions to be made this week,” Prime Minister Jean Castex said during a visit to the Paris region health agency. “All these new indicators are worrisome.”

With a presidential race just 15 months away, Macron has to navigate vocal opposition and staunch criticism of his handling of the crisis, including a slow start to the vaccination campaign. Any decision could strengthen far-right leader Marine Le Pen, who looks set to be his chief rival in the elections. Earlier on Monday, she compared the government’s strategy with the body of a dead dog drifting in water currents without purpose.

In a sign of how tight the race could be, a recent poll put Le Pen ahead of Macron in voting intentions for the first round.

Limited studies show the more contagious U.K. variant of Covid-19 now accounts for as many as 9% of infections in parts of France, including in the region around Paris, Jean-Francois Delfraissy, head of the scientific council, said on BFM TV on Sunday. He said the U.K. has shown that intermediary measures, such as France’s curfew, aren’t enough to stop the new variant.

Macron and Castex have been holding weekly meetings with a limited group of ministers, typically on Wednesdays, to discuss the latest coronavirus numbers and agree on measures. A French official said no decision on a third lockdown has been made at this stage.

A tightening of virus measures also risks additional pain for the budget. The government spent around 86 billion euros ($104 billion) on the Covid-19 crisis in 2020, including costs for social security and local authorities, finance ministry officials said last week. France’s fiscal effort amounted to 4.5% of 2019 economic output, compared with around 4% in Germany and Italy.

The government plans to spend at least an additional 40 billion euros on measures to stimulate the economy as part of its Covid-19 recovery plan, Finance Minister Bruno Le Maire said on Thursday.

France’s second lockdown started late October and ended mid-December with a curfew that was expanded earlier this month. It brought only partial relief for the health system, with hospitalizations and intensive-care patients still more than five times higher than in August. As the pace of daily infections climbed for most of January, hospitalizations are also on the rise again. The number of Covid-19 patients requiring intensive care is nearing 3,000, the level below which it dropped in the second week of December.

Business lobby Medef has called for all stores to remain open during a new lockdown, after the government was criticized for closing “non-essential” retailers such as book stores and clothing outlets during the second lockdown. In addition to implementing a nationwide 6 p.m. curfew, the government has kept bars, restaurants, theaters and gyms shut.

Yet there were also voices in support of a new tightening. Xavier Bertrand, the right-wing head of the northern Hauts-de-France region and a potential presidential candidate, says a new lockdown is unavoidable.

“We must avoid being late for a new explosion of the epidemic, and for that we must take the necessary measures as quickly as possible,” Bertrand said on RTL radio on Monday. “This virus continues to kill.”