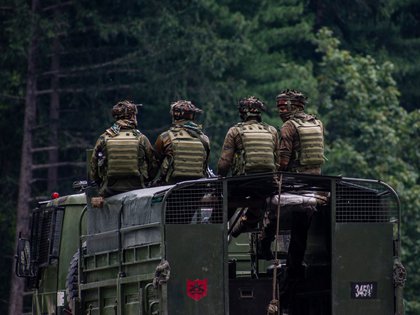 GAGANGIR, KASHMIR, INDIA - SEPTEMBER 2: Indian army convoy carrying reinforcements and supplies, drive towards Leh, on a highway bordering China, on September 2, 2020 in Gagangir, India. India and China, have stumbled once again into a bloody clash over their shared border. India rushed additional troops to Ladakh after claiming to have foiled what it called China's provocative maneuvers to change the status of Line of Actual Control, the de-facto border between the two countries, in the Himalayan region. As many as 20 Indian soldiers were killed in a "violent face-off" with Chinese troops in June this year in the Galwan Valley along the Himalayas. Chinese and Indian troops attacked each other with batons and rocks. The deadliest clash since the 1962 India-China war and both have not exchanged gunfire at the border since 1967. Since the recent clash, there has been no sign of a breakthrough. India said its soldiers were killed by Chinese troops when top commanders had agreed to defuse tensions on the Line of Actual Control, the disputed border between the two nuclear-armed neighbours. China rejected the allegations, blaming Indian soldiers for provoking the conflict, which took place at the freezing height of 14,000 feet. The killing of soldiers has led to a call for boycott of Chinese goods in India. (Photo by Yawar Nazir/Getty Images) Photographer: Yawar Nazir/Getty Images AsiaPac

(Bloomberg) -- Indian and Chinese soldiers have clashed along their contested Himalayan border in the first outbreak of violence in seven months, even as senior military commanders from both sides met in an attempt resolve the ongoing standoff.

Several soldiers from both sides were injured in the fresh outbreak of violence along the border that runs through the northeastern state of Sikkim, ANI reported.

The Indian Army confirmed there was was a “minor face-off” at Nakula area of North Sikkim on Jan. 20 that was resolved by local commanders.

Both sides moved thousands of soldiers, tanks, artillery to the disputed border after clashes in the Galwan Valley in Ladakh last May that left at least 20 Indian soldiers and unknown number of Chinese troops dead.

India and China share a 3,488 kilometer (2,167 mile) disputed and unmarked boundary, known as the Line of Actual Control.