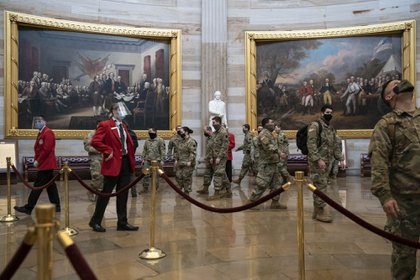 Members of the National Guard tour the U.S. Capitol Rotunda in Washington, D.C., U.S., on Monday, Jan. 25, 2021. Donald Trump's trial in the Senate will kick off today when House impeachment managers deliver their single article accusing him of inciting the Jan. 6 Capitol that left five people including a police officer dead.

(Bloomberg) -- The U.S. House’s single article of impeachment of former President Donald Trump for inciting the Jan. 6 insurrection at the Capitol is to be delivered ceremoniously by a contingent of House members walking across the Capitol to the Senate on Monday evening.

House Democratic impeachment managers, who will prosecute the case, and Trump’s defense team will have until the week of Feb. 8 to draft opposing briefs under an accord that gives the two sides time to prepare and senators time to consider President Joe Biden’s Cabinet nominees and begin work on his Covid-relief plan.

A Ritual Delivery From House to Senate to Begin

When House managers walk the article of impeachment against Trump across the Capitol at about 6:55 p.m. Washington time Monday evening, they’ll be repeating a ritual that dates back to President Andrew Johnson’s 19th century trial.

House Clerk Cheryl Johnson and Timothy Blodgett, the House’s acting sergeant at arms, will lead a procession along with the nine House managers who will argue the case for impeachment in the Senate trial. Their arrival will trigger the formal start of proceedings.

The route through the House’s Statuary Hall and the Capitol Rotunda to the Senate was first followed in 1868 by Representative Thaddeus Stevens one day after the House voted to impeach Johnson. Stevens was so weak from an illness that he had to be carried in a chair by attendants.

This time, the lead impeachment manager, Representative Jamie Raskin, will read the article of impeachment on the Senate floor, charging Trump with incitement to insurrection. Then the nine managers are scheduled to return to the House.

The Senate will be sworn in to service on the trial on Tuesday at 1 p.m. Washington time. -- Mike Dorning