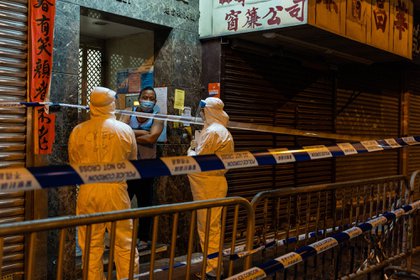 Government workers wearing personal protective equipment (PPE) talk to a resident in an area under lockdown in the Jordan area of Hong Kong, China, on Sunday, Jan. 24, 2021. Hong Kong imposed a temporary lockdown on thousands of residents for the first time to carry out mandatory testing of the coronavirus, with authorities warning the move will be repeated if needed to contain the outbreak. Photographer: Chan Long Hei/Bloomberg

The U.S. will ban entry to most non-U.S. citizens who have recently been in South Africa in response to the new Covid-19 strain there, a White House official said. The government, including the Pentagon, is stepping up surveillance of coronavirus variants, the new head of the Centers for Disease Control and Prevention said.

The U.K. is considering tightening controls at its borders to prevent the import of new strains of coronavirus, which it fears may undermine the success of its vaccination program. France may go into another lockdown within days to halt the spread of the potentially deadlier strain that emerged in Britain last year. Oslo tightened restrictions because of that variant’s spread, and Sweden banned travel from Norway.

Israel’s vaccination campaign is beginning to rein in the disease, according to the country’s second-largest health network. The nation will bar foreign flights in order to limit the country’s exposure to mutated strains.

The U.K. is considering tightening controls at its borders to prevent the import of new strains of coronavirus, which it fears may undermine the success of its vaccination program.

“The conversation has changed about the borders,” Britain’s health secretary Matt Hancock said on Sky News on Sunday. “These new variants can really set us back and we need to protect ourselves against them coming in.”

Hong Kong lifted the lockdown of thousands of residents over the weekend after it completed testing the people in the area in a bid to contain a worsening outbreak, the government says in a statement on its website. The government tested about 7,000 people and as of midnight of Jan. 25 found 13 confirmed coronavirus cases.

The U.S. will ban entry to most non-U.S. citizens who have recently been in South Africa in response to the new Covid-19 strain there, according to a White House official familiar with the plan. It’s unclear how long the restrictions will continue.

The Biden administration will also continue restrictions on travel to the U.S. from Brazil, the U.K., Ireland and 26 countries in Europe that the Trump administration planned to relax as of Monday, said the official, who requested anonymity because the plans haven’t been made public.

A new variant of the coronavirus that originated in South Africa is likely to be in the U.S. already, said Scott Gottlieb, former U.S. Food and Drug Administration commissioner.

“I feel fairly confident that it is here and we’re just not detecting it yet,” Gottlieb said on “Face the Nation Extra” on CBS. “We’re not sequencing a lot of strains right now in the United States. Maybe we’re sequencing a couple of thousand a week right now. That would be on the high end. “

Norway extended tougher restrictions beyond the Oslo area amid uncertainty about how quickly and widely the U.K. variant is spreading. Authorities said there’s a big risk, and now is the time to act as the infection-rate curve is trending downward. The restrictions will apply through the end of January.

Sweden has introduced a travel ban with neighboring Norway that starts at midnight on Monday and runs until Feb. 14.

The country has also extended its temporary entry bans from the U.K. and Denmark until Feb. 14, Interior Minister Mikael Damberg said at a press conference on Sunday. “A feared outbreak of the mutated variant in Olso, in combination with the extensive shutdowns may entail a risk of a flood of people to the Swedish side of the border,” he said.

Brazilian protesters took to the streets to call for President Jair Bolsonaro’s impeachment as his administration faces criticism over a slow coronavirus vaccination roll-out and a surging death toll from the pandemic.

Kindergarten through eighth-grade teachers had been scheduled to report to school buildings on Monday ahead of students having the option to return to classrooms on Feb. 1. If an agreement isn’t reached and teachers refuse to return to work, this would be the second teachers strike in as many years in the nation’s third-largest district.

France registered 18,436 new cases over the past 24 hours, the lowest number in nearly a week. The country is set to go back into lockdown “within days” amid concerns over the spread of the more-contagious U.K. variant of the coronavirus, Journal du Dimanche said. Government spokesman Gabriel Attal told France 3 TV on Sunday that no decision has been taken yet and that Covid figures in the next few days will be crucial. After the government was criticized for the slow rollout, the country’s vaccination campaign is picking up speed, with more than 1 million people vaccinated so far, according to the French Ministry of Health’s website.

California reported fewer new cases and fatalities than its 14-day rolling average, according to the health department’s website. The state said there were 24,111 new Covid-19 cases yesterday, below the average of 31,299, and 429 deaths, fewer than the 500 average. The state’s 14-day positivity rate dropped to 9.8%, down from 12.4% a month ago. California has administered 40.3 million tests in total.

Ireland reported the fewest new cases in almost a month, in a sign that one of the world’s worst outbreaks is may be coming under control. There were 1,378 newly confirmed cases on Sunday, the health ministry said in an emailed statement. That’s the lowest number since Dec. 28. There were 23 deaths. “We are starting to make progress in reducing the level of the virus in the community,” Chief Medical Officer Tony Holohan said.

Israel’s world-leading campaign to vaccinate its citizens is beginning to rein in the disease, according to the country’s second-largest health network.

Maccabi Health Services studied a sample group of 50,777 people over the age of 60 inoculated in late December and then again in mid-January. Raw data showed that two days after the second shot, the number of new infections and hospitalizations were both down about 60% from their peak, researchers reported.

Meanwhile, the nation’s cabinet approved restrictions that will bar foreign flights from entering the country in order to limit the country’s exposure to mutated strains of Covid-19. The closure takes effect at midnight Monday and will last through the end of the month.

Some 500 Airbus SE workers in Hamburg are self-isolating after 21 of them tested positive for the virus that causes Covid-19, German newswire DPA reported, citing a city health department spokesman.

Airbus is reviewing the impact on production, broadcaster NDR reported. The plant, which cranks out most of the A320 aircraft, has about 12,000 employees.

The U.S. government, including the Pentagon, is stepping up surveillance of coronavirus variants to monitor their impact on Covid-19 vaccines and therapeutics, the new head of the Centers for Disease Control and Prevention said.

“We are now scaling up both our surveillance of these and our study of these,” CDC Director Rochelle Walensky said on “Fox News Sunday.” The agency is working with others, including the Defense Department and the Food and Drug Administration, to monitor the variants, she said.

The U.K. reported its lowest daily tally since Dec. 19, with 30,004 new cases on Sunday. That’s below the average of more than 37,000 over the previous seven days. Another 610 people died after testing positive for the virus, also lower than the weekly average of 1,248. Both figures tend to be lower on weekends. More than 6.35 million people have received the first dose of a vaccine.

The U.S. passed another milestone in the year-long struggle against Covid-19, as total infections exceeded 25 million, or about 8% of the population, according to data reported Sunday by Johns Hopkins University.

On Saturday, the nation added 172,878 cases, 0.7% less than the average of the preceding seven days, figures compiled by Johns Hopkins and Bloomberg show. While daily case counts have declined after spiking to records of almost 300,000 after the Christmas holiday, the weekly average of about 175,000 new infections every day remains high.

The U.S. death toll surpassed 417,000 as another 3,390 people died of Covid-19 nationwide. It was the lowest increase on a Saturday in three weeks. The U.S. count is more than double that of India, which has world’s second-most infections.

New York state reported 12,720 new cases, as the virus continues to spread at a slower pace than during a post-holiday surge. Total hospitalizations declined slightly to 8,613, as did the statewide positive test rate to 5.09%, according to a statement from Governor Andrew Cuomo. Another 160 people died.

Portugal on Sunday reported the highest daily number of deaths since the start of the outbreak. There were 275 fatalities in a day, more than the previous record of 274 on Saturday, taking the total to 10,469.

The government reported 11,721 new confirmed coronavirus infections in a day, compared with 15,333 cases announced on Saturday, taking the total to 636,190. The number of patients in intensive-care units rose by 22 to 742. The country’s national health service has a capacity of about 1,200 intensive-care beds.

The U.K.’s health minister warned that coronavirus vaccines may be less effective against new variants of the disease, such as those found in South Africa and Brazil, and that stricter border controls are therefore justified.

“We don’t know the degree of that,” Matt Hancock said in an interview on Sky News on Sunday, commenting on the extent of any potential reduced efficacy of the vaccines. “In the meantime, we’ve got to have a precautionary principle that says let’s not bring these new variants back to the U.K.”

The warning came as the U.K. reported it had vaccinated more than 5 million people, including three-quarters of those over 80. Britain has already banned flights from South Africa and neighboring countries, plus all of South America. The U.K. is grappling with the highest death toll in Europe from Covid-19 and trying to recover from its deepest recession in more than 300 years.

France is set to go back into lockdown “within days” amid concerns over a new wave of contaminations driven by the U.K. variant of the coronavirus, Journal du Dimanche said, citing unidentified people with knowledge of the matter.

French President Emmanuel Macron could announce the lockdown -- the country’s third -- on Wednesday night, according to the paper. It could start before the end of the week and last at least three weeks. France passed the threshold of 3 million Covid-19 cases on Friday.