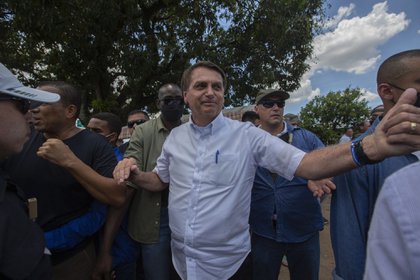 (Bloomberg) -- Brazilian President Jair Bolsonaro‘s approval rating cratered amid a surging death toll from the coronavirus and confusion over a national vaccination plan, according to a survey published on Friday.

Bolsonaro’s personal backing tumbled to 26% from 37% in a previous poll published Jan. 14, marking the biggest weekly drop of his presidency, according to a survey conducted by IDEIA and published in business magazine Exame. His disapproval rating rose to 45% during the same period.

Brazil has come under international criticism over its slow response to the pandemic as the healthcare system in the Amazon city of Manaus faces collapse. Bolsonaro has downplayed the virus, and said on Friday there’s no scientific proof on vaccines. Meanwhile, the nation’s economic recovery is showing signs of slowing as the government pares back stimulus.

Such levels of discontent have not been seen since the middle of last year, when the pandemic overwhelmed hospitals and forced lockdowns across the nation. IDEIA surveyed 1,200 Brazilians across the country between Jan. 18-21, with a margin of error of approximately 3%.

The results mirror findings from pollster XP/Ipespe, which registered a six percentage point fall in Bolsonaro’s popularity to 32% this month as cash transfers expired.