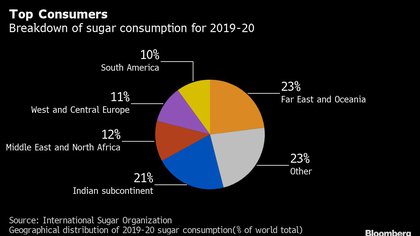 (Bloomberg) -- Even with restaurants, cinemas and stadiums shut, people kept binging on sugar.

A home-baking frenzy, stimulus checks and stockpiling all meant that global demand fared quite well last season, proving wrong some of the world’s top sugar traders. What’s more, consumption is set to rebound to a record in the year that began in October, according to Tom McNeill, a director at Brisbane, Australia-based researcher Green Pool Commodity Specialists.

That’s a stark turnaround from the early phases of the coronavirus crisis, when lockdowns from Paris to Los Angeles hit sales of everything from softs drinks to chocolate. People have now adapted to pandemic life, government handouts in places like the U.S. and Brazil kept consumers shopping and importing nations in Asia stockpiled to ensure supplies in case of shipping disruptions.

“There are certainly a lot more restaurants and cafes that are still open and doing business through takeaways and delivery,” said Ben Seed, analyst at London-based sugar trader Czarnikow Group. “People have adapted well now, which wasn’t the case when the first lockdowns happened.”

Sugar consumption is incredibly hard to measure and traders only have a better idea of what actually happened when data comes in, usually with a big delay. Green Pool, which at some point expected demand to drop by a million metric tons, now sees a decline of 100,000 tons. ED&F Man Holdings Ltd. estimates demand probably fell 1% at most, compared to a previous forecast for 2%, said Rodrigo Ostanello, country manager for the trader in Brazil.

With economies reopening and countries rolling out vaccines, sugar demand is rebounding just as production in Brazil, the European Union and Thailand are under stress. That’s sent sugar futures traded in New York rallying more than 70% since the pandemic lows in April. Czarnikow expects consumption to rise 2% after falling for the first time in 40 years, Citigroup forecasts an increase of 0.9%, while JPMorgan Chase & Co. expects a gain of 1%.

Asia and Africa are leading the way, with demand in the U.S. and Europe projected little changed, said Ruhani Aggarwal, an analyst at JPMorgan in India. Indonesia and China are building stockpiles as the pandemic roils supply chains, prompting governments to seek to maintain ample supplies.

Refiners in Indonesia, the world’s largest importer of raw sugar, are set to bring in 10% more this year, according to the nation’s Sugar Refiners Association. China bought a record 5.3 million tons of sugar in 2020 after Beijing relaxed control on those imports above low-tariff rate quotas, customs data showed.

To be sure, the crisis isn’t over yet and many countries in Europe have recently gone into a third lockdown. Consumption in the EU had already been falling for years as health-conscious consumers cut back, while the bloc doesn’t have the same culture of take out, delivery and drive-thrus as in the U.S.

Yet, stimulus measures have boosted demand. In Brazil, a government support program helped local mills to sell 4.6% more domestic sugar from January to November last year versus a year earlier, after a decade of low or negative growth rate, according to industry group Unica.

Consumption could still rise again this year as an overall economic recovery would more than offset a potential end to the government’s aid policy, according to Ricardo Carvalho, commercial at BP Bunge Bioenergia, one of the nation’s largest sugar producers.

Top consumer India will see consumption rebound by as much as a million tons this season, according to Rahil Shaikh, managing director of agriculture trader company Meir Commodities India Pvt.

“Sugar is a cheap energetic product and during the lockdowns, people have made more cakes at home, drinking more sugary drinks,” said Jeremy Austin, director of trader Sucres et Denrees SA in Brazil.