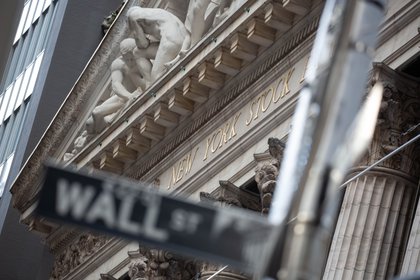 A Wall Street street sign in front of the New York Stock Exchange (NYSE) in New York, U.S., on Monday, Jan. 4, 2021. In a historic year that marked a rapid plunge into bear market territory and a swift recovery into the bull zone, high-flying technology stocks and electric-vehicle pioneer Tesla Inc. were standout trades. Photographer: Michael Nagle/Bloomberg

(Bloomberg) -- Two months after Donald Trump issued an executive order banning U.S. investments in Chinese military-linked companies –- and more than a day after it took effect -- the financial industry is still struggling to figure out what it can and can’t do under the new rules.

The lack of clarity has prompted some Wall Street firms to err on the side of caution, meaning the ban could have a broader market impact than initially envisioned. Two bond fund managers in Asia said it has become increasingly difficult to sell notes of affected companies because many brokers have pulled back from dealing in the names. The managers asked not to be identified discussing private information.

Among the questions still hanging over America’s biggest securities firms is whether Trump’s order forces them to stop facilitating investments in restricted companies for all clients, or just those in the U.S. Some firms have determined they should implement the ban globally, while others believe they can continue to trade for non-U.S. clients, people familiar with the matter said. Brokers have also come to differing conclusions on whether they’ll continue to handle sell orders.

Several brokers said the situation was fluid and their interpretations of the rules are subject to change.

Even those that plan to keep trading in the banned companies for non-U.S. investors have found it difficult in some cases to pinpoint who is exempt from the ban. For instance, some brokers are unsure whether they can execute trades for Asia-based mutual funds that manage money on behalf of U.S. investors. Often brokers don’t even know if the funds serve U.S. clients.

The result is that Trump’s ban will likely end up restricting many non-U.S. investors, potentially adding to selling pressure in the affected stocks, bonds and derivatives and reducing their liquidity. Shares of China Mobile Ltd., China Telecom Corp. and China Unicom Hong Kong Ltd. have already swung wildly over the past week as investors parsed changing and at times conflicting guidance from regulators, index compilers and the New York Stock Exchange.

Whether the ban leads to further price declines remains to be seen. Some of the affected stocks have soared over the past two days, with China Mobile rallying from a 14-year low in Hong Kong, after a flood of buy orders from traders based in China. Some Asia hedge funds including Long Corridor Asset Management Ltd. have also been buying, judging the stocks to be undervalued.

Questions over the scope of Trump’s ban have persisted despite several attempts by the U.S. Treasury Department to provide additional clarification on its website. Treasury didn’t immediately respond to a request for comment on Tuesday.

Trump’s order applies to more than 30 Chinese companies deemed by the U.S. to be owned or controlled by China’s military. It prohibits any transaction by a “United States person” in the companies’ “publicly traded securities, or any securities that are derivative of, or are designed to provide investment exposure to such securities.”

Treasury has said that the ban covers funds and index-linked products with any exposure to the companies, no matter how small. In updated guidance on Jan. 6, it said that market intermediaries can facilitate divestitures in the securities through Nov. 11. By that time, U.S. investors must be fully divested.

Some big U.S. money managers have already started selling down their stakes. BlackRock Inc., the world’s largest money manager, reduced its holdings in China Mobile, China Telecom Corp. and China Unicom Hong Kong Ltd. in recent weeks and plans to keep selling, according to a person with knowledge of the matter.

Vanguard Group said on Tuesday it had liquidated its holdings of Chinese companies included in the ban as of Jan. 8. That was the day MSCI Inc. removed shares of the three telecom companies from its widely followed equity indexes. FTSE Russell and S&P Dow Jones Indices have taken similar steps.

Hong Kong’s most active exchange-traded fund, managed by a unit of State Street Corp., said it would refrain from making new investments in companies covered by the ban. The Hong Kong Monetary Authority has asked State Street to further clarify the impact of its decision, while former HKMA chief Joseph Yam told media including South China Morning Post that State Street is no longer fit as manager of the ETF. State Street said it couldn’t immediately comment.

China over the weekend pushed back against U.S. sanctions, issuing rules to protect its firms from “unjustified” foreign laws and allowing Chinese courts to punish global companies for complying with foreign restrictions. That could complicate plans by major Wall Street banks and their foreign rivals to expand in China as the nation opens its financial markets to attract more capital and investments. So far, the political turmoil has had little impact on the financial opening.