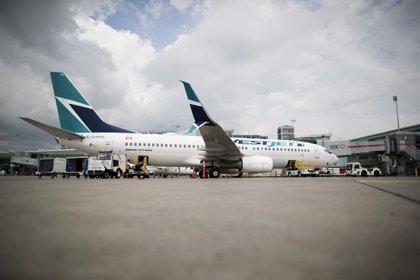 A WestJet plane sits at a gate at Pearson airport in Toronto in July 2019.

(Bloomberg) -- WestJet Airlines Ltd. said it would reduce capacity by a further 30% in February and March, affecting the jobs or pay of roughly 1,000 employees and bringing the number of domestic and international flights it operates down to levels not seen in almost 20 years.

The cuts come after Prime Minister Justin Trudeau’s government ordered travelers to present a recent negative Covid-19 test before being allowed to board flights into Canada. The new rules took effect Thursday.

“The entire travel industry and its customers are again on the receiving end of incoherent and inconsistent government policy,” Sims said in a company statement. “We have advocated over the past 10 months for a coordinated testing regime on Canadian soil, but this hasty new measure is causing Canadian travelers unnecessary stress and confusion and may make travel unaffordable, unfeasible and inaccessible for Canadians for years to come.”

Overall, after the new cuts are made through March, WestJet will have reduced its capacity roughly 80% from a year earlier. More than 230 additional weekly departures will be dropped, including 160 domestic flights, and 11 international routes will be suspended. Daily international flights will fall to five, compared with 100 last year.

The airline will operate about 150 daily departures in all, the smallest number since June 2001, it said. Roughly 1,000 employees across WestJet companies will be affected by furloughs, temporary layoffs, unpaid leaves or reduced hours. The company will also freeze hiring.

The latest employment numbers in Canada show the labor market is deteriorating. For the first time since April, the country lost jobs as health authorities tightened measures to contain the spread of the virus.