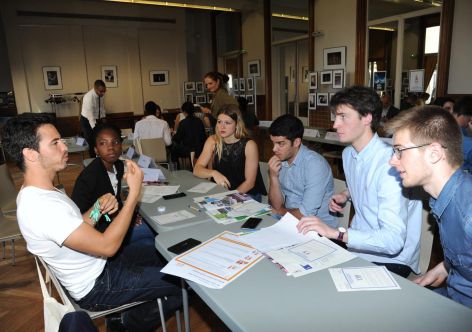 (ATR) French youth say they are confident the 2024 Summer Olympics will be held in their capital city.

A new survey conducted by Elabe polling institute on behalf of the Paris 2024 bid team polled 1,000 people aged 15 to 25 and found high rates of support from the important demographic.

"We are delighted to announce the results of our recent survey, which shows 82 percent of young people in France and 88 percent in Paris supporting our bid for the 2024 Olympic and Paralympic Games," Paris 2024 co-chairman Tony Estanguet said in a statement.

While more than 80 percent of those polled throughout France support the Olympic project, 74 percent also said they were likely to attend some of the events as spectators. Moreover, 72 percent of those surveyed felt confident the Olympics would be awarded to Paris over its rival Los Angeles.

Paris 2024 leaders say the outpouring of support received from all sectors of French society demonstrates the city has the "right vision at the right moment" to host the Games.

"Public support is key from the bid phase to the delivery of the Games and the spectacular celebration it brings," Paris 2024 chief executive officer Etienne Thobois said in a statement.

"We are very proud to see how our youth has embraced Paris 2024, and we know it is because there is a sense of belonging, of a shared adventure."

Paris 2024 will continue to drum up support among the French youth at events such as "Generation Marateens" this Wednesday. The program is supported by the City of Paris and will bring together approximately 800 youth to experience running and the Paris Marathon.

Coaches and athletes will attend the event to provide a glimpse of the benefits of running and competing in sport.

The bid team is also touring the country to increase support among adults as well. Bordeaux is the latest large French city to receive a visit from Paris 2024.

According to French media, Rey announced over the past weekend that Bordeaux would host men’s and women’s football (soccer) matches should the IOC choose Paris over Los Angeles to organize the 2024 Games.

The Paris 2024 bid team wants to involve the entire country in the project to host the Games and is using trips to other large French cities as a way to grow support. Marseilles, Nantes, Strasbourg and Toulouse were previously visited by the bid team.