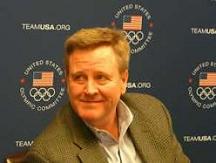 (ATR) The U.S. Olympic Committee Board of Directors spent 90 minutes going over the controversial revenue-sharing negotiations that are being conducted with the IOC.

Chairman Larry Probst said the USOC has come up with a "new construct to address the financial issue," and since July both sides have done some "financial modeling."

"It was more of an educational session," Probst said at a press conference following the board meeting, which was held in conjunction with the U.S. Olympic and Paralympic Assembly in Colorado Springs.

The USOC currently receives 20 percent of global sponsorship revenues and 12.75 percent of the deal for U.S. broadcast rights, a deal which does not sit well with other stakeholders in the Olympic Movement and has fomented ill will toward U.S. Olympic bids.

In response to media reports out of Beijing that IOC President Jacques Rogge said he was "hopeful that on the mid-term we will find a good solution," Probst would only say the USOC was "making good progress."

"I’m not going to speculate how long it will take," Probst added. "Both sides are committed to moving forward in a positive and productive fashion. Both are taking it seriously."

While he hoped it would be resolved "as soon as possible," Probst said, "There’s work to be done."

Rogge will attend the 5th International Athletes Forum in Colorado Springs next month, but Probst said he did not anticipate any discussions or negotiations about revenue sharing. IOC members Rene Fasel and Thomas Bach will also attend.

Denver and Reno/Tahoe, which are both seeking to host the 2022 Winter Olympics, weren’t the only potential bid cities at the Assembly. Raleigh-Durham has expressed interest in the 2018 Youth Olympic Games.

CEO Scott Blackmun said that the USOC puts the YOG in the same category as Summer and Winter Olympics in terms of not considering a bid until the revenue-sharing issue is resolved.

He added, "We don’t want a Youth Olympic Games to impair our ability to successfully bid for an Olympic Games and Winter Olympics. We haven’t evaluated what the impact would be."

Probst reiterated that he and Blackmun are making inroads towards becoming better known and better partners internationally, with the ultimate goal of launching an Olympic bid.

"Whether it takes 5 years, 7 years, 10 years, I don’t know what the right number is," Probst said. "I think we understand the end goal and Scott and I are committed to doing the work to put us in the best possible position, not only to bid, but to win."

Blackmun said that since he and Probst don’t have an agenda of pushing a bid city like New York or Chicago, "It’s much more natural for us to just talk about sport… much more lax and easier to get to know people than when they think you’re asking them for something."

· The board spent time with Luc Bardin, chief marketing officer at BP, which is one of the key sponsors of the USOC.

· As part of its diversity initiative, the board agreed to hire a diversity officer to work on the USOC staff.

· The board approved a new NGB for golf, to be called the USA Golf Federation. It will be a partnership of the U.S. Golf Association. PGA Tour, LPGA and PGA of America and will be based in St. Augustine, Fla. Golf and rugby will join the Olympic program in 2016.

Two members of the U.S. national soccer team, which lost to Japan in final of the Women’s World Cup, will visit northeastern Japan in October on a goodwill tour with some Japanese players.

The IOC will also be involved in the trip, with the players bringing sports equipment and conducting some clinics.

Probst and Blackmun were the first NOC leaders to visit Japan following the earthquake and tsunami. Probst said that the Japanese NOC was very focused on retaining the World Gymnastics Championships, which will be held in October in Tokyo, and "felt as though we were helpful in that regard."

As part of its tribute to Olympians who passed away in the previous year, the USOC honored filmmaker and storyteller extraordinaire Bud Greenspan, who made 10 official Olympic films.

"He loved the Olympics more than anything else in the world,"said his partner, Nancy Beffa. "We didn’t have children, but we had all our films and all the people we met over the years. This, to us, is what we call Olympic family."

Beffa tells Around the Rings that Cappy Productions is in talks with London Olympic organizers to make the 2012 official film and is seeking funding.

Films with the Greenspan trademark tell the stories of athletes who persevere to compete valiantly in the Olympic arena.

In a film narrated by Costas, writer Frank Deford said of Greenspan, "He can pick out the one little thing that nobody else sees, even though it’s right in front of everybody’s eyes."

Said Blair, "He doesn’t have an Olympic medal, but I think in my eyes he’s got a little piece of everybody’s."

Olympic champion Evan Lysacek, who received his award as 2010 SportsMan of the Year, announced publicly that he "has set my sights on Sochi" and will try to defend his title at the 2014 Winter Olympics.

"We know that Olympic moments happen every single day; the spirit, intensity and power of the Games runs through our veins," Lysacek said.

"I’m back in training. I’m happy, nothing would make me more proud than to step on the Olympic ice one more time with the flag on my chest and USA on my back."

Skier Lindsey Vonn, SportsWoman of the year, was training in Chile and was unable to attend, but she thanked the USOC in a video.

Boxing coach Christy Halbert received the Olympic Torch Award, which recognizes an individual who has made a positive impact on the Olympic Movement in the United States. For the past decade, Halbert pressed for the inclusion of women’s boxing in the Olympic Games and accepted the award on behalf of female boxers who "answer the call of the bell to action."

The 2012 London Olympics will be the first Games in which women participate in all sports.

"The addition of women boxers is long overdue," Halbert said. "The significance of what they embody inspires all of us to accept challenges in spite of what barriers are in front of us," she said.

Halbert, who lives in Nashville, Tenn., has also coached female boxers from other countries around the world, including Viet Nam, Rwanda, Madagascar, Guatemala, Syria and Afghanistan.

"The Olympic nod gives legitimacy to their athletic pursuit," Halbert said, adding that their experience as boxers has transformed other parts of their lives.

Adolph Kiefer stole the show at the U.S. Olympic and Paralympic Assembly banquet on Friday night.

Kiefer, who was only 17 when he won the gold medal in the 100-meter backstroke, taught more than 30,000 naval personnel to swim, invented the modern racing suit, the first commercial lane lines and created modern pool designs.

Kiefer, who was known as "Sonny Boy" when he swam 29 races in 32 days in six countries, became lifelong friends with Jesse Owens.

"The big secret in life is knowing how to win as well as how to lose," said Kiefer, who is 93 years old.

Kiefer’s mantra has always been, "Swim for health, swim for fun, but don’t forget to swim."

Costas, who will host his 10th Olympics for NBC/Universal next summer in London, said his network has gotten a "bad rap that we focus only on American athletes. It’s simply not true. If you monitor other countries, they tend to focus on their athletes more disproportionately than we do ours."

Costas said that when drama occurs at the Olympics, it is "particularly arresting or incredible." His most compelling moment was watching Muhammad Ali lighting the Olympic cauldron in Atlanta in 1996.

"I heard something I’ve never heard before or since, an audible gasp from 75,000 people," he said.

Among all sporting events, Costas said, "Nothing at its peak brings it all together, all the elements, the way the Olympics can."

Written and reported in Colorado Springs by Karen Rosen