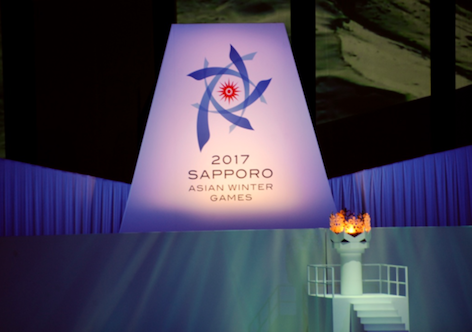 "Asia is certainly gaining importance and presence in the sports world and has now become the most influential area in sport history," Takeda said in a statement. "It goes without saying that the upcoming three Olympic Games are going to be held in this great continent.

"As the Tokyo 2020 Olympic Games coming up within three years with full attention, the performance of athletes will create the ‘power of sport’ which delivers dreams, hopes and courage to the Japanese public."

The eighth edition of the AWG opened Sunday, Feb. 19 with an opening ceremony and cauldron lighting at the Sapporo Dome. Sapporo is hosting the AWG for the third time, having also hosted the first two editions in 1986 and 1990.

Asia’s elite winter sports athletes from 31 countries will compete for medals in 64 events across five sports and 11 disciplines. All Olympic disciplines aside from bobsleigh, luge, skeleton and Nordic combined will be contested across 12 venues.

"I hope that the many athletes and officials coming from some30 countries and regions, as well as the spectators, will enjoy the city’s world-class appeal in winter and will have truly memorable experiences filled with delight, excitement and discovery," said Sapporo Mayor and Sapporo 2017 president Katsuhiro Akimoto.

Around the Rings staff are on the scene in Sapporo providing coverage of the AWG. The AWG will conclude on Feb. 26.

IOC chief Thomas Bach will be in Finland this week as the International Ski Federation Nordic World Ski Championships begin in Lahti.

He is set to meet Finnish president Sauli Niinistö in Helsinki for talks about the country’s sporting movement.

Discussions with NOC and federation leaders are also expected to take place.

Bach will then attend the Lahti 2017 championships which open on Feb. 22. The centenary World Championships in Lahti is touted as the biggest event during celebrations this year to mark the 100th anniversary of Finland's independence.

Lahti was chosen to host the event for the first time in 16 years at the FIS Congress in South Korea on May 31, 2012. The championships will conclude on March 5.

The test event schedule for the PyeongChang 2018 Winter Olympics will take a short hiatus as the month draws to a close.

The final test event of the month concludes Sunday, Feb. 26 at the Gangneung Curling Centre where the World Curling Federation's Junior World Championships are currently underway.

Action picks back up in March with the IBU World Cup Biathlon and International Bobsleigh and Skeleton Federation first International Training Period both beginning on March 2.

The championships run from Feb. 25-26 at the Olympic Oval in Calgary that staged speed skating during the Calgary 1988 Winter Games.

The event features women andmen competing over two days in the 500m and 1000m sprints.

Xander Schauffele credits his Olympic success for maintaining composure down the homestretch: “To have that experience from Japan - I really tapped into that today”