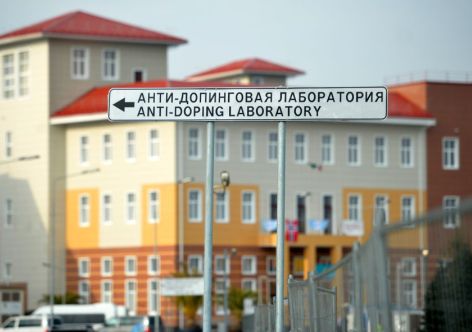 A sign shows the direction to the anti-doping laboratory of the 2014 Winter Olympic Games on February 21, 2014 at the Olympic Park in Sochi, as a German athlete has failed a doping test - the first such case to hit the Sochi Games. The German Olympic Sports Confederation (DOSB) said it had been informed by the International Olympic Committee (IOC) that the "A" sample "of a member of the German Olympic team produced a result that diverged from the norm". AFP PHOTO / LEON NEAL (Photo credit should read LEON NEAL/AFP/Getty Images)

(ATR) IOC sanctions for Russia for the Sochi 2014 doping scandal may come just weeks before the PyeongChang 2018 Olympics, Around the Rings has learned.

The IOC Executive Board had hoped to be in a position to "take all the appropriate measures and sanctions" in February or March after completion of the work of two IOC commissions investigating evidence of state-sponsored doping in Russia.

But ATR is told that the workload of the two inquiries probing evidence detailed in WADA investigator Richard McLaren’s two reports is so significant that Thomas Bach’s top team is unlikely to be equipped with enough information to decide Russia’s fate until the end of the year.

Swiss IOC member Denis Oswald, who is chairing the commission probing allegations of doping manipulation at the Sochi 2014 Winter Olympics, tells ATR that an interim report will be ready for the IOC’s ruling body at its March 15-17 meeting in PyeongChang.

But a full report is expected "certainly not before summer" – and almost certainly well after that. "It is not easy. So much material," he said, adding that analyzing evidence in McLaren’s report was only part of the work, with additional documentation and hearings expanding the brief.

Disciplinary proceedings were opened last month against 28 Russian athletes following Sochi 2014 doping retests – and more cases are expected following re-analysis of samples in the coming weeks from all the country’s athletes who participated at the Games.

Oswald said sanctions will follow hearings for Russian athletes caught up in the doping conspiracy. "We have to respect their right to be heard," he said, adding that he didn’t expect hearings for all of them to be completed "until the end of the year."

With the PyeongChang Winter Games opening Feb. 9 next year, this timetable would leave the IOC with only a few weeks to deliver sanctions against Russia and its athletes for the Sochi 2014 doping cover-up.

"We try to go as fast as possible to make sure we do it well. We should not sanction those who did not deserve to be sanctioned," Oswald said.

"Hopefully not a few weeks before the Games, like in Rio," Oswald said of the IOC’s crisis meetings to decide punishment for Russia last July on the eve of the 2016 Olympics.

On the findings of his commission, Oswald said he hoped for "a more clear situation in summer but not a final one". McLaren’s second report released in December added another layer of work. In his explosive dossier, he said more than 1,000 Russian athletes were involved in or benefited from "a cover-up on an unprecedented scale."

McLaren said the conspiracy "began in 2011 and went on well beyond Sochi 2014," and that the "key findings of first report remain unchanged." He added: "The Russian Olympic team corrupted the London Games on an unprecedented scale, the extent of which will probably never be fully established."

Oswald and his committee are scheduled to meet McLaren in the coming weeks to discuss progress.

Samuel Schmid’s commission probing the involvement of Russian government ministers in the Sochi 2014 doping scandal is working in parallel with Oswald’s inquiry.

One commission member told ATR the "volume of work is quite daunting", saying there was "so much documentation to get through – and hearings still to come".

Schmid’s commission is not expected to meet until late January or even next month, slowing progress on the inquiry. But ATR is told that the commission is prioritizing its work to focus on winter sports under efforts to provide a solid interim report to the IOC Executive Board in March.

Possible IOC sanctions later this year for Russia may include disqualification of athletes from the 2018 Winter Olympics, and the exclusion of implicated officials, entourage or government officials from the Games.