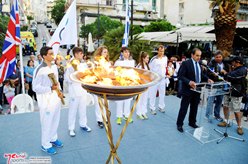 (ATR) Sebastian Coe, David Beckham andLondon 2012 colleagues are on their way to Athens to pick up the Olympic flame for the Games.

Coe and company will travel aboard a British Airways charter, BA 2012, from Heathrow to Athens, arriving Wednesday afternoon. They will be just in time for the arrival of the flame for a ceremony at the Acropolis following an eight-day relay through Greece. Great Britain’s senior IOC member, Princess Anne, will take part.

A private rehearsal for the handover is set for Wednesday night, media and public not invited.

The Athens leg of the relay ends the next evening in the white marble Panathenaic Stadium built for the 1896 Olympics. The last runners are Chinese gymnast Li Ni (the last torchbearer in Beijing) followed by Greek weightlifter Pyros Dimas.

An hour-long handoverceremony will pass the flame to London 2012.

Coe will take the flame in miner’s lamps back to the U.K. the next day, the BA charter landing in the western tip of the country, near Land’s End, the point where the London 2012 torch relay begins May 19.

Around the Rings Editor Ed Hula is scheduled to run a leg of the Greek relay in Athens, about an hour before the handover ceremony.

ATR European Editor Mark Bisson is among a dozen or so journalists selected to ride with Coe aboard the BA charter. He’ll be filing blogs from his trip over the next three days, as well as reporting on the first days of the torch relay with Christian Radnedge.

Written and reported in Athens by Ed Hula