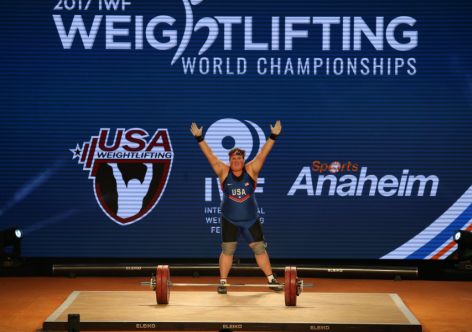 (ATR) Sarah Robles saved the best for last for the host United States on the final day at the 2017 IWF World Weightlifting Championships in Anaheim, California.

Transgender athlete Laurel Hubbard of New Zealand won two silvers in her debut at the Worlds.

Robles is elated with her victory, telling Around the Rings that one of her goals was "to win a medal at the Olympics or the World Championships. Now I’ve done it at both." Robles won bronze at Rio 2016. Like in Rio, she was successful in all six of her lifts in Anaheim.

The 29-year-old hasn’t made an official decision on Tokyo 2020 but admits it’s likely. "I’m still waiting on breaking those American records. I’ve got to stick around long enough to finally break those."

Hubbard, who has declined to talk to media throughout the Worlds, finished runner-up to Robles in both the snatch and total weight for her two silver medals. It is the first time since her debut in international weightlifting last March that Hubbard has lost, having won her first three events in Australia. She is in New Zealand’s team for the Commonwealth Games in April.

Despite having complied with IOC procedures that allow her to compete as a woman, Hubbard has faced opposition from some rivals.

But don’t count Robles among them.

The golden day for Robles followed the USA ending two long medal droughts earlier at the Worlds. Harrison Maurus, at only 17 years of age, won the first medals by an American man in 20 years while Mattie Rogers broke a 12-year medal drought for the women.