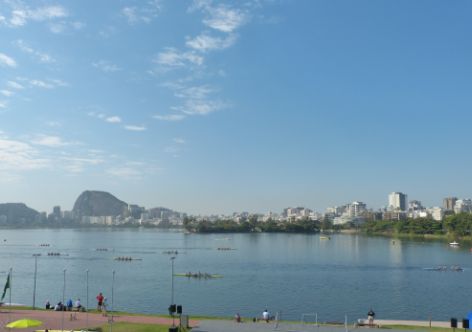 (ATR) The president of the International Rowing Federation tells Around the Rings that athletes would not be participating in regattas in Rio de Janeiro if experts did not feel the water was safe.

The 2015 World Junior Rowing Championships will run from Aug. 5 to 9 and are serving as the test event for the federation ahead of the Games.

Jean-Christophe Rolland, president of FISA, says the federation has been testing the waters of the Lagoa de Freitas since Rio de Janeiro was awarded the Olympic Games in 2009 so that it can study changes in the waters over long periods.

"We have been talking with experts to understand the water because we are not medical experts, but based on these, we questioned if we can allow the athletes to go on these kinds of water, and the answer from experts was clearly yes," Rolland told ATR.

"This water is polluted, but to a certain level, that does not refrain us from staging a regatta. I am not saying there is no risk, but I am saying we don’t take a risk for the health of the athletes."

No athletes or team officials have expressed enough concern to pull out of the event, Rolland said. That assurance was important for the federation as it continues Rio 2016 preparations.

The Lagoa de Freitas was named in a report from the AP showing dangerous levels of bacteria and viruses, which could be harmful to athletes. The IOC and federations have maintained that the water quality is fine and meets the standards for the World Health Organization, but they will conduct further tests given the report.

"Because of the article we did take the appropriate measures and ask the WHO about viruses, and they answered," Rolland said.

"I don’t want to judge about this article, but I will say this: we have taken the appropriate measure, and we want the regatta to go on at the right level. We want to be transparent with our athletes and our teams and based on all the elements we have been provided by experts, we can run a rowing regatta on this lake."

Rolland called the venue, located in the middle of the city close to Copacabana Beach, a dream for the federation. For some past Olympics, the rowing venue was an artificial lake created outside the city for the regatta, but Rolland says "this time it is one of the most iconic venues we’ve ever had."

"From the promotion of the sport, we cannot ask for more," Rolland added.

"For the sport of rowing, I think it is a good opportunity, so I am very pleased with the course."

FISA will continue to monitor the Lagoa after the Rio 2016 Coordination Commission meets on Aug. 10 to 12, and will work with the organizing committee to make sure all modifications work out. For the Olympic Games, a floating grandstand still needs to be installed, which will generate the full spectator experience the sport deserves, Rolland says.

"To organize such an event requires a lot of work, a lot of details, and to be honest, we have to face some challenges like we do for any of our events," Rolland added.

"We are dealing with all these aspects, and we are working very hard with the organizing committee to ensure that what we are seeing here will help for next year."