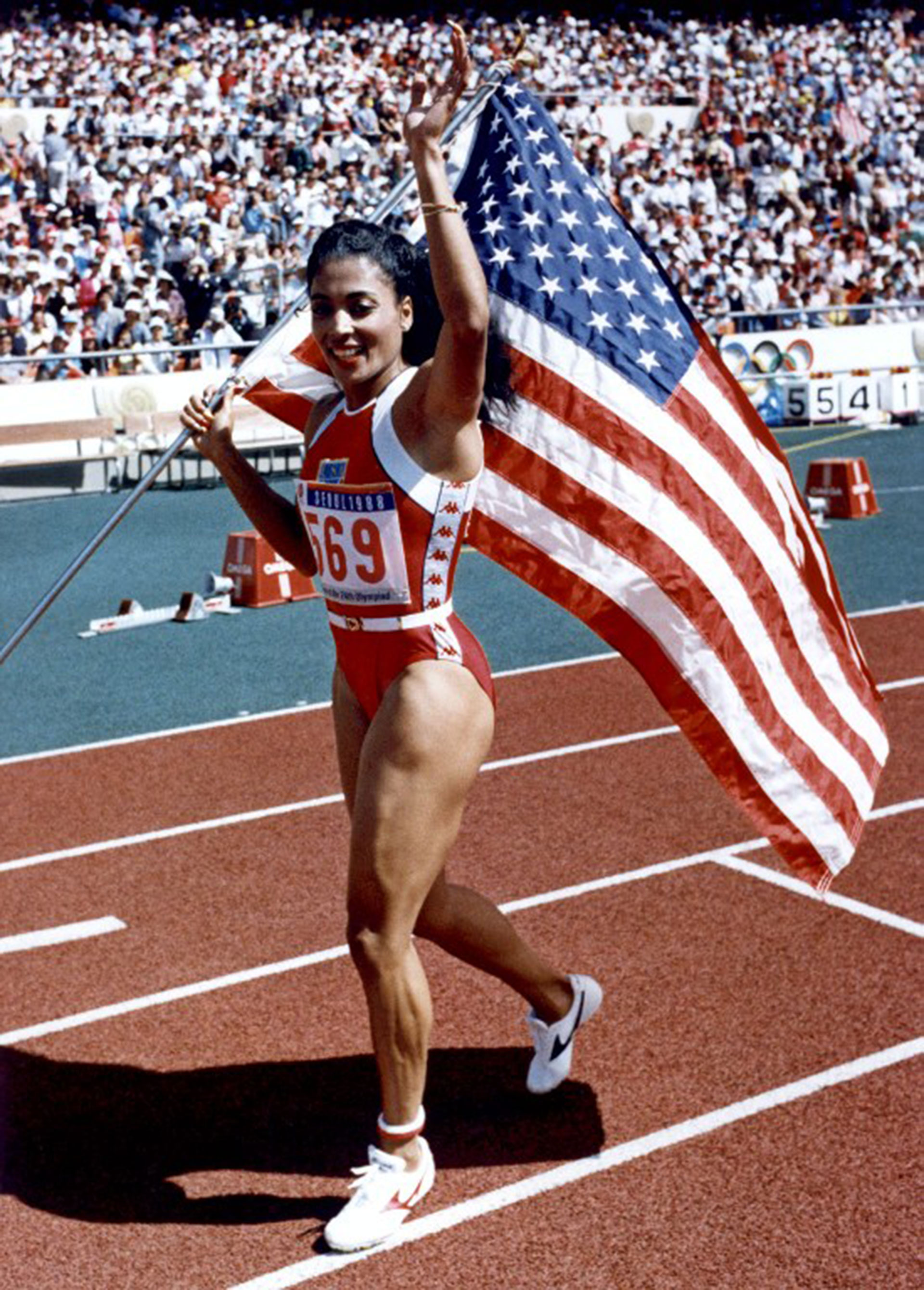 The American Florence Griffith Joyner waves at the crowd as the carries the American flag after setting a new Olympic record and winning the gold for her 10.54 performance at the 100 meters race of Seoul Olympic Games. The American Evelyn Ashford won the silver medal and the German Heike Drechsler won the bronze. (FILM) AFP PHOTO / AFP PHOTO / IOPP / RON KUNTZ

A Jamaican official contends Florence Griffith Joyner’s legendary 100-meter dash world record should be gone with the wind, which suspiciously did not blow at all according to the official equipment reading during that iconic race 34 years ago.

Garth Gayle, president of the Jamaica Athletics Administrative Association, wants Griffith Joyner’s time of 10.49 seconds during the 1988 U.S. Olympic Trials to be nullified and the world record assigned to Elaine Thompson-Herah, who ran 10.54 seconds last August.

Gwen Torrence, a contemporary of the sprinter known as Flo-Jo, thinks that’s a lot of hot air.

”You can’t change history,” Torrence told Around the Rings. “The fact that it was zero wind reading is questionable, but you can’t erase history no matter how you put it.”

And Torrence, who won three Olympic gold medals, a silver and a bronze and was the world 100-meter champion in 1995, added even more bluntly: “You can’t give away a world record.”

However, Gayle said he is prepared to lobby on Thompson-Herah’s behalf. He told the Jamaica Observer Thompson-Herah’s mark “was done in the highest of international competition and by such, there is a bona fide argument that her efforts are worthy of admission. All the technical areas were covered, such as wind reading, and the authenticity of the track is not in question.” 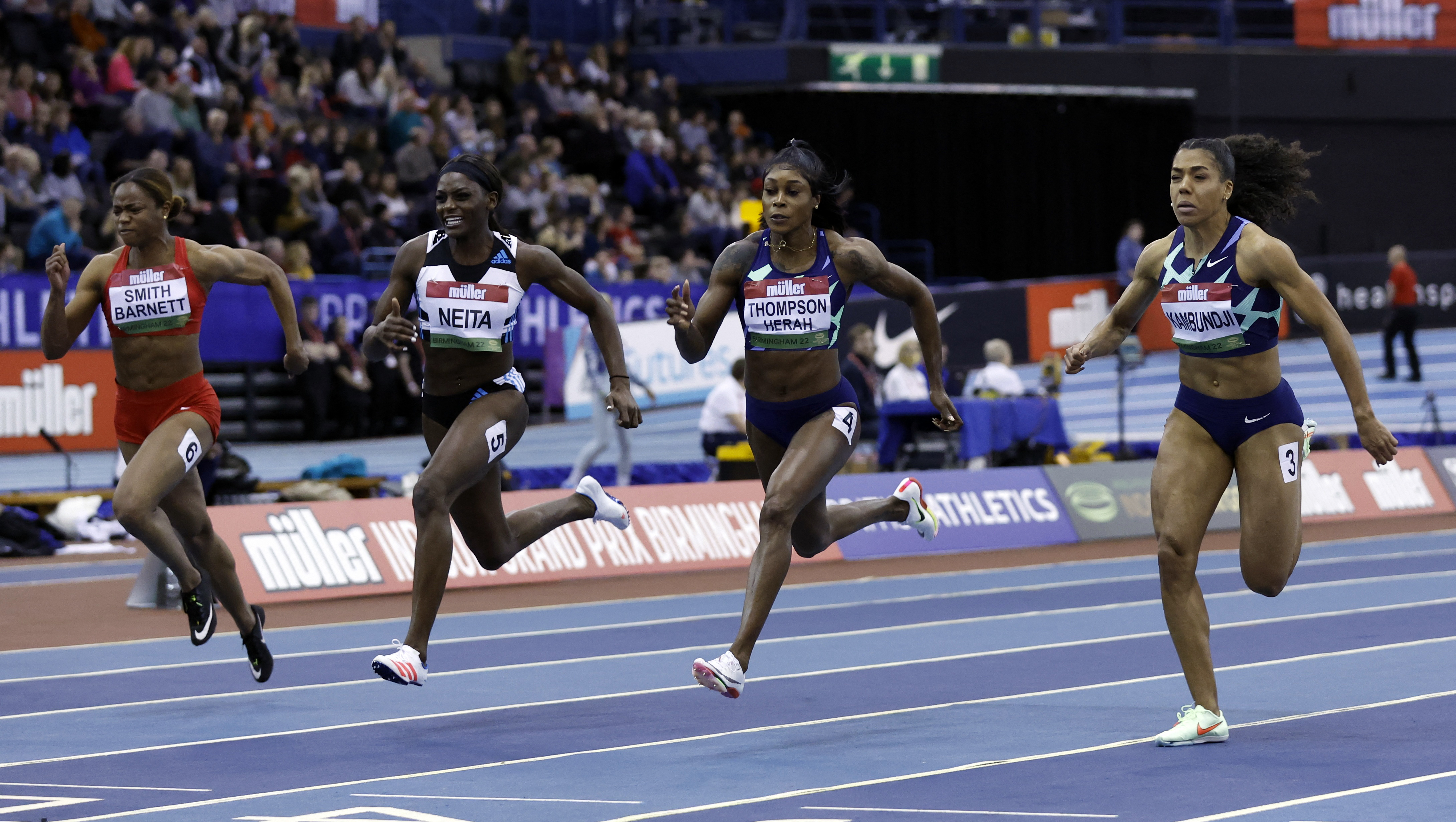 World Athletics president Sebastian Coe is not inclined to revise the record book.

”We may all have our own views about the era in which some of these records were set,” he said, “but I think legally, and with structures like the Court of Arbitration for Sport where things get challenged, this is not easy territory. But, let us just celebrate those extraordinary performances that are beginning to get quite close to some of these records that we’re talking about.”

Griffith Joyner died suddenly in her sleep in 1998 due to suffocation caused by an epileptic seizure. The stylish sprinter has been the subject of speculation ever since she set her world records in the 100 and the 200 (21.34 seconds, which also still stands) and a Hollywood biopic starring Tiffany Haddish is in the works. 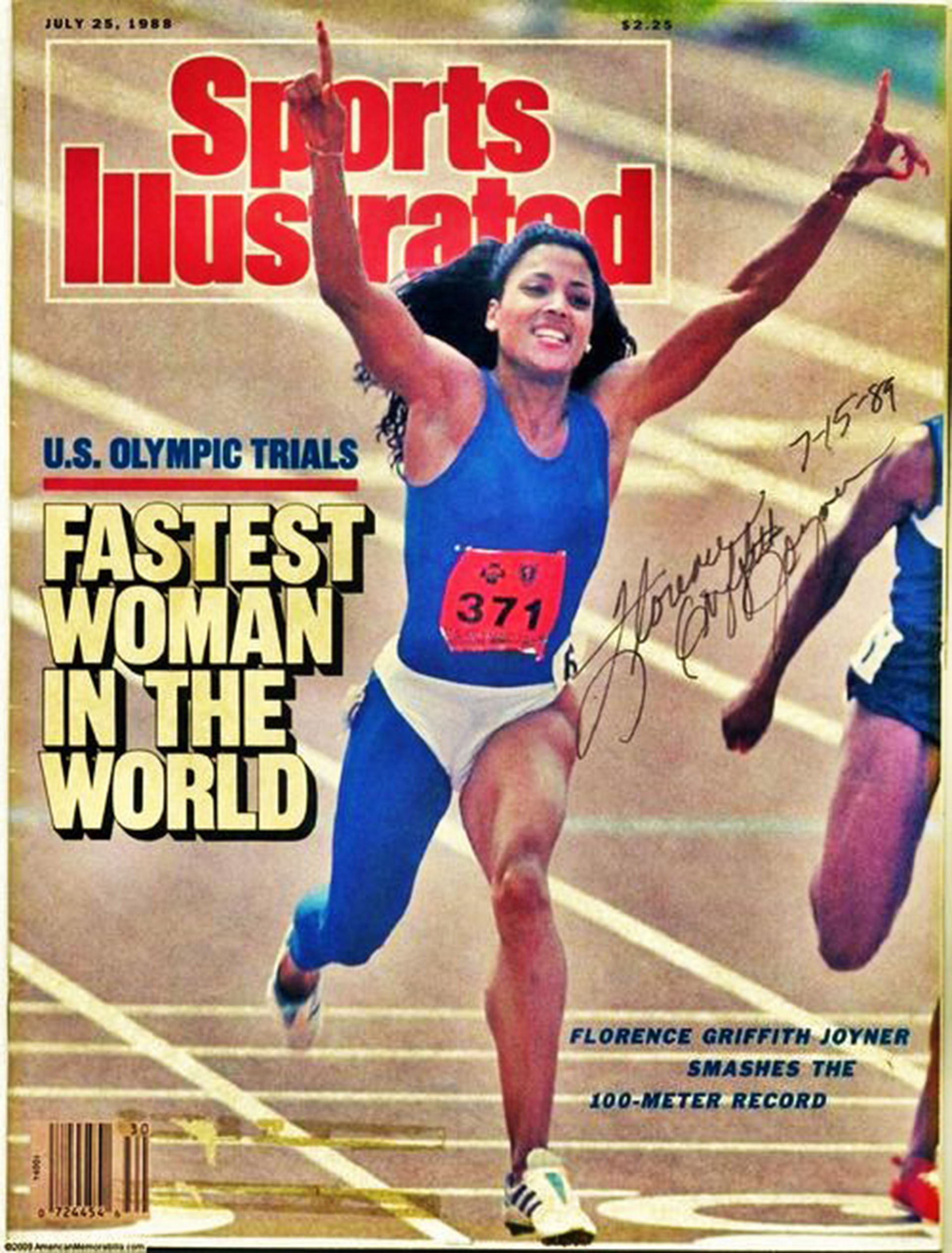 Her rise to prominence was unexpected. After winning the silver medal in the 200 meters at the Los Angeles 1984 Olympic Games, Griffith Joyner stepped back from the sport before resuming serious training.

Then Griffith Joyner took the U.S. Olympic Trials in Indianapolis by storm. In the first of four rounds on July 16, 1988, she clocked 10.60 seconds with a tailwind of 3.2 meters per second, well above the allowable limit of 2.0 mps.

Later that day in the quarterfinals, Griffith Joyner obliterated Evelyn Ashford’s world record of 10.76, with Diane Williams running a personal best of 10.86 seconds for second. The wind gauge read 0.0 seconds. Some people think there must have been a cross wind. Others say an official was standing too close to the gauge for it to register properly.

Torrence won quarterfinal No. 3 in a time of 10.78 with a massive tailwind of 5.0 mps. That was the fastest time in the Trials by any female sprinter other than Griffith Joyner.

Torrence remembers the Indianapolis meet as being incredibly windy. “It makes all of us wonder, ‘Was something wrong with that wind gauge?’” she said. “But they should have solved that a long time ago. If they were going to do something, they should have checked everything out back then. You can’t go back now and make something up.”

Griffith Joyner went on to win the gold medal at the Seoul 1988 Olympics in the 100, with a time of 10.54 seconds, thanks in part to a tailwind of 3.0 mps. Earlier, she ran a wind-legal 10.62 seconds in the quarterfinals to set the Olympic record, which stood until Thompson-Herah broke it last year in Tokyo. 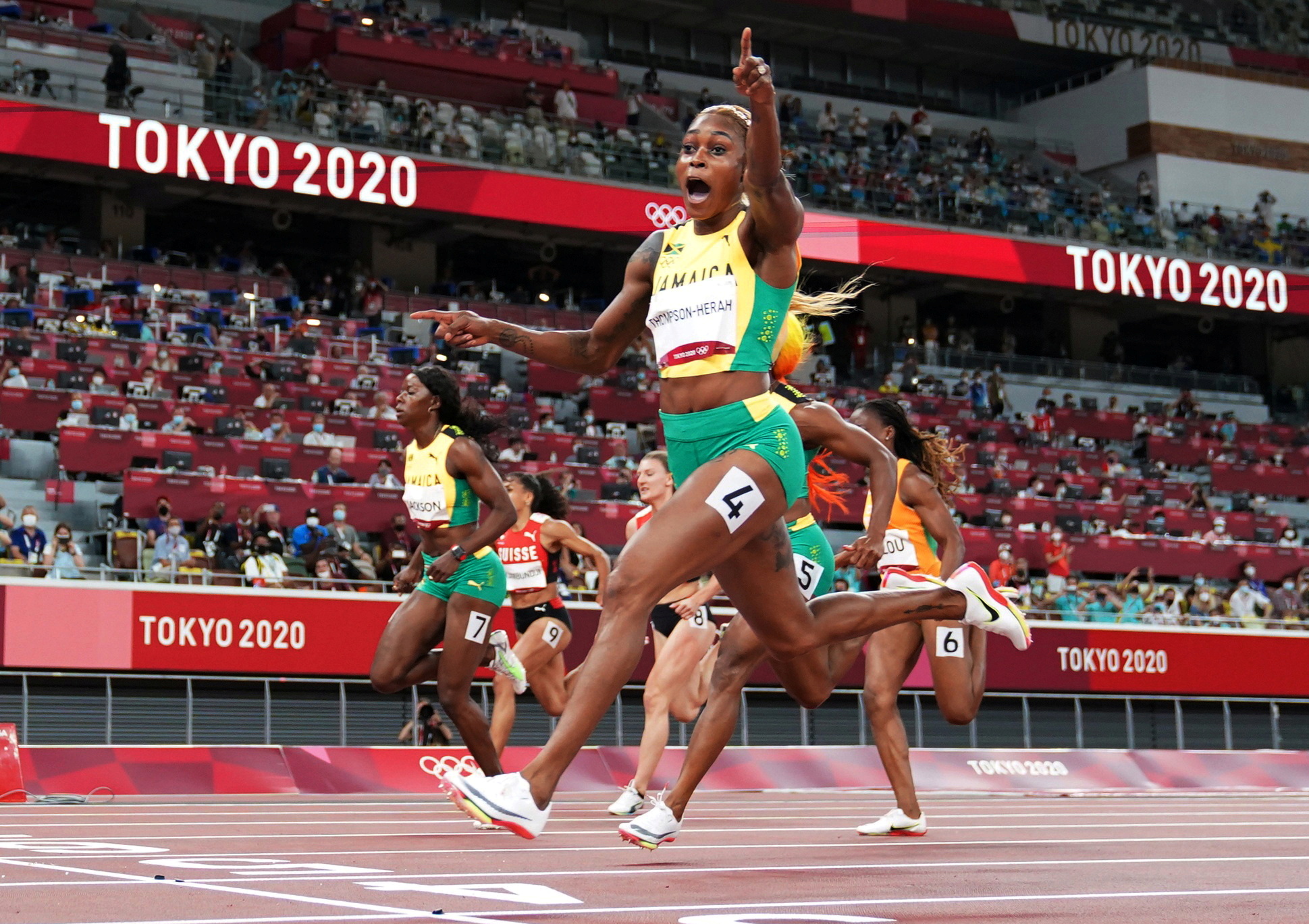 The Jamaican ran 10.61 into a slight headwind of minus 0.6 mps to win her second straight Olympic gold in the 100. She has now won five Olympic gold medals.

Thompson-Herah followed up her Tokyo triumph by running her personal best of 10.54, on Aug. 21, 2021 at the Prefontaine Classic in Eugene, Oregon. She had a tailwind of 0.9 mps.

Last weekend, Fraser-Pryce ran a world-leading 10.67 seconds in Kenya in her first 100 of the season.

Torrence thinks both Jamaican sprinters have a chance to break Flo-Jo’s record on the track, not due to any administrative lobbying.

”It’s attainable the way they are running now,” Torrence said. “With the right conditions, perfect conditions, somebody is going to get it.”

She added athletes now have better training, more technology and better shoes than they did three decades ago.

The 2022 World Championships will be held at the same track in Eugene, Oregon, where Thompson-Herah ran her PR.

Torrence said Griffith Joyner had a “perfect” running style. “If you look at Flo-Jo in slow motion, when her leg gets under her hips, her leg is straight down. When she cocks it, her knee comes all the way up to her hip. It’s almost like she’s bouncing off the track, and that is hard to do.”

When Griffith Joyner died, there were allegations performance-enhancing drugs had contributed to her death.

The medical report said she had a congenital brain abnormality known as cavernous angioma. Dr. Richard Fukumoto, chief of forensics for the Orange County, Calif. sheriff and coroner, said the abnormality had never been associated in medical research with steroids or any other drugs.

Primo Nebiolo, president of the IAAF, now World Athletics, said at the time, “This report ensures that Florence Griffith Joyner will be able to rest in peace. Her family have had to endure irresponsible media reports that have sought to tarnish her reputation — without any real proof. These campaigns of misinformation serve not only to damage individual athletes and our sport as a whole, but also have a negative impact on the multi-million dollar anti-doping campaign to which the IAAF has been committed for many years. I would urge media representatives to act more responsibly in future cases of this type. I hope that, like the IAAF Family, they will now send a message of love and sympathy to the bereaved relatives who have lost so much.”

Still, the doping rumors continue to swirl around Griffith Joyner as surely as the wind controversy does.

”That was a question amongst everybody, whether they talked about it or not,” Torrence said. “When she passed away, people were suspicious — you can’t not be — but she was gone. Nobody wanted to address it, they weren’t going to test her.