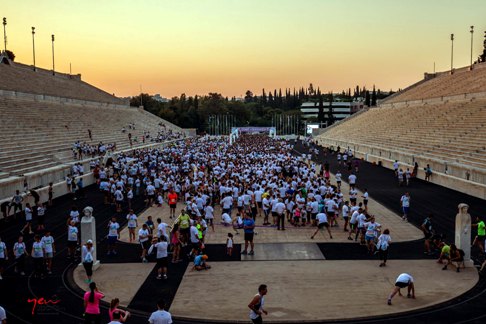 The Hellenic Olympic Committee reports that it organized events for the June 23 Olympic Day in three cities, Athens and Thessaloniki the two largest in Greece and Ancient Olympia, home of the Olympics.

Participation surpassed every expectation says the HOC in a release.

IOC President Thomas Bach’s Olympic Day message was included in each event. Commemorative hats and diplomas were given to participants.

In addition, children in the summer camp "5 Rings" celebrated the Olympic day at the Olympic Stadium in Athens with Olympic champions, Nikos Syranidis, Niki Bakoyannis and Olga Vasdeki. HOC member Yiannis Karras was there.

"Great enthusiasm" reported from the celebrations organized in Ancient Olympia by the municipality of Olympia. On hand for the event were HOC Secretary General Manolis Kolymbadis and Fani Petralia and Giorgos Alikakos, members of the HOC.

In Thessaloniki the Kids Olympics simulation of Olympic sports was held at the city’s Olympic Museum.

More than 50 students visited the Kalamaki Naval Club with their physical education teachers for a first taste of Olympic sailing.