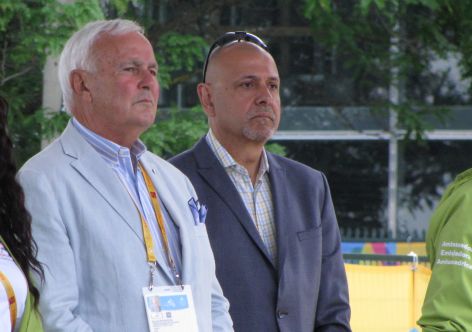 (ATR) A manager of volunteers at the Pan Am Games says she was sexually harassed by Toronto 2015 chair David Peterson.

David Peterson is denying the sexual harassment claim and says he looks forward to confronting the allegations in court.

"I’m surprised and outraged that Ms. Morris would endeavor to embarrass me and the 2015 Pan Am Games staff with this lawsuit," Peterson said.

Toronto 2015 has yet to be served with official lawsuit papers but say they have seen the statement of claim filed by Ximena Morris, according to spokesperson Neala Barton.

Morris claims David Peterson repeatedly made comments regarding her appearance, initiated unwanted embraces and publicly embarrassed her at a Pan Am function.

Morris then complained about the instances to other officials within the organizing committee but was progressively demoted from her position as a manager to a clerical role. She claims this represents constructive dismissal.

Morris is suing for damages worth $10 million.

Parapan Am Games Winding Down

The Parapan Am Games will conclude Saturday evening with closing ceremonies at Nathan Phillips Square.

Artists Wyclef Jean and Meghan Patrick are headlining the ceremony taking place in the shadow of Toronto’s city hall. The iconic and colorful Toronto sign is being moved from the square to allow higher attendance.

Nathan Phillips Square hosted victory celebrations for Canadian athletes and spectators throughout the Pan Am and Parapan Games. The square also served as one of the premier stages for the PANAMANIA culture and arts festival that took place during the games.

Before the games come to their official close, one day of competition remains. Athletes in football sevens, goalball and wheelchair basketball will compete for the final medals of the games.

Brazil is in a commanding lead on the medal table with 213 total medals and 88 golds. Canada is in second place with 143 medals while the United States are in third with 111.

Toronto Mayor John Tory is still contemplating a potential bid to host the 2024 Olympics and says he is "nowhere near" making a decision.

Time is running out as interested cities have one month left before the IOC deadline of September 15 to submit an official bid.

Tory met with Canadian Olympic Committee president Marcel Aubut and member of the Toronto 2008 bid team Bob Richardson on Wednesday to learn more about the overall bidding process. The mayor is taking in as much information as he can before he makes a decision on bidding.

"I am going to undertake, with the help of a lot of other people, a careful assessment of this issue in the time that's available to us...as to what the facts are, about how Pan Am went and what the bidding rules are, what the costs might be and all the things you'd expect me to take into account before even considering signing or not signing a letter," he said.

Tory has said he wants to know the impact the Pan Am and Parapan Am Games had on the city of Toronto before making his decision. With the Parapan Am Games concluding Saturday, impact reports will likely be completed at the beginning of September.

Waiting this long to decide on a bid could pose a challenge for members of the bid team who would need to put together a cohesive plan in just two weeks' time.

Although it is Tory’s decision to bid for the 2024 Games, his decision must still be approved by the city council. No city council meeting is currently scheduled before the September 15 deadline.