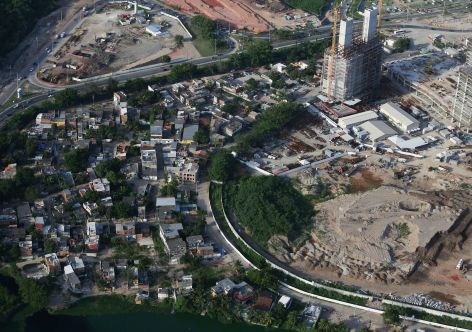 RIO DE JANEIRO, BRAZIL - FEBRUARY 24: Construction continues (R) at the Olympic Park for the Rio 2016 Olympic Games in the Barra da Tijuca neighborhood, as remaining homes from the Vila Autodromo favela stand (L) on February 24, 2015 in Rio de Janeiro, Brazil. The Olympic Park will occupy 1.18 million square meters hosting 16 Olympic disciplines and will be the heart of the games. (Photo by Mario Tama/Getty Images)

(ATR)"With fewer than 500 days to go before the next Summer Games, Rio faces great problems including crime, pollution and energy,"Anna J. Kaiser of Time Magazine says.

Kaiser breaks down the road ahead for Rio 2016 by highlighting four major challenges the organizing committee will face in the days leading up to the Games.

Sailing publication LiveSailDie.com features an open letterto the U.S. Olympic and Paralympic Congressional Caucus that details concerns about the health of Olympic sailors planning to compete in 2016.

The letter from Glenn T. McCarthy, a blogger and sailor, is dated March 30.

"There are other sites in Brazil two to four hours away from Rio that have held major sailing events successfully in open ocean waters away from a major city where expectations of water quality would be better," McCarthy writes.

"It seems each month a new report comes out with horrible implications for the health of our citizen athletes, who are capable of bringing diseases back to U.S. soil."

NBC Sports writer Nick Zaccardi is helping out fans as they start setting up their viewing schedule for the 2016 Rio Olympics.

Zaccardi highlights "potentially intriguing events" for every day of competition.

Thomas Barabbi, a writer for the International Business Times, reports on another obstacle for Rio 2016.

"Demonstrators from Vila Autodromo in Rio de Janeiro, Brazil, took to the city’s streets Wednesday to protest the planned demolition of their community," Barabbi says.

"Most of the favela's 600 families have accepted compensation deals from city officials to move off their land, which the government plans to convert into access roads and security structures for Rio's Olympic Park."

Barabbi adds that some of the offers to leave the area have reached as high as $853,674.

New York Times reporter Juliet Macur blames the United States Olympic Committee for the backlash in Boston over the city's bid for the 2024 Olympics.

"Now what, USOC," Macur writes. "It's as if you have chosen your prom queen, only for her to balk at the prospect of buying an expensive evening gown and pricey high heels.

"Thanks, USOC, but no thanks. Here's your corsage back."

Adam Vaccaro, Boston.com staff writer, says the City of Boston expects the Olympic stress in the city to change.

"The City of Boston expects to see changes to the 2024 Olympics plans after it has concluded its run of nine community meetings later this year."

John FitzGerald, a Boston official leading the city's Olympics meetings, tells Vaccaro, "After these first nine meetings that end in September, we'd like to start seeing some real results produced."

The Wall Street Journal's Matthew Futterman seems to disagree with predictions from the City of Boston.

"The lack of public support may doom Boston's bid for the 2024 Olympics.

"We've become the laughingstock of the world," Leung says.

"Papers in France, Italy, and Germany are having a field day chronicling Boston's self-implosion.

Respected Olympic observer Alan Abrahamson posted a scathing piece on Monday titled "Boston 2024 is doomed: be done with it,"urging the USOC to give the Games to LA.

Hollywood May Take On Olympic Drama

"Clint Eastwood is seriously circling the job of directing Fox's untitled project about Richard Jewell, the heroic security guard who discovered a suspicious backpack in the Olympics compound during the 1996 Atlanta Games."

Jewell, who will be played by actor Jonah Hill, was denounced at the time as a possible terrorist. ActorLeonardo DiCaprio could possibly play Jewell's attorney in the film.