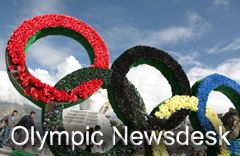 A group of business leaders in Dallas wants to bid for the 2020 Olympics. But their quest seems to be headed towards a quick demise without the backing of the U.S. Olympic Committee.

USOC spokesman Patrick Sandusky tells the Dallas Morning News that the U.S. has no plans to bid for 2020 and there are no signals that a change in this policy will come within a year, when the first bids are submitted to the IOC for 2020.

Dallas was one of the contenders for the U.S. nomination for the 2008 Olympics for which New York City was chosen.

The group backing a Dallas bid has created a website, http://www.dallas2020games.org.

Based on the model of London 2012 and other recent Games, Brazil will create an Olympic Development Authority (ODA) that will coordinate public services and deliver infrastructure for the Rio 2016 Olympic Games.

Despite his Tory allegiance, London Mayor Boris Johnson is warning the new government of David Cameron not to cut spending for the Olympics.

New Olympics minister Jeremy Hunt said Wednesday after he was appointedthat the Olympics would not be protected from across-the-board spending cuts to curb Britain’s deficit.

Johnson says he will fight to maintain spending for the Olympics.

"If you think that either Londoners are going to pay more or be shortchanged then that's not going to happen. I can guarantee both," Johnson is quoted in the Evening Standard.

Cameron is trying to trim as much as $90 billion from the U.K. budget. No figure on cuts to Olympic spending has been proposed.

VisitBritain has signed an agreement with Embratur, the Brazilian national tourism organization, to form a partnership aimed at increasing tourism between the two countries during the period of the 2012 and 2016 Olympics in London and Rio de Janeiro.

The agreement was signed during an Olympic tourism summit held by Embratur in Rio this week.

"We feel that this sets the stage for much greater engagement between our two countries and how we can work together on tourism issues and many others," said VisitBritain CEO Sandie Dawe.

Lobbying for increased air capacity between the U.K. and Brazil is mentioned as one of the activities the alliance will pursue.