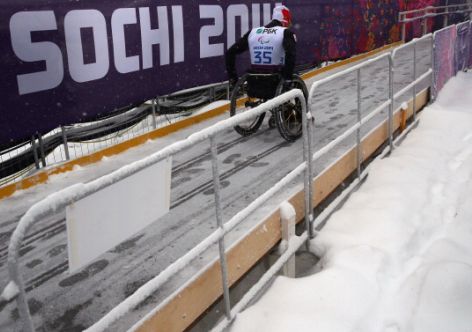 SOCHI, RUSSIA - MARCH 12: An athlete goes up a ramp in the snow during day five of Sochi 2014 Paralympic Winter Games at Laura Cross-country Ski & Biathlon Center on March 12, 2014 in Sochi, Russia. (Photo by Ronald Martinez/Getty Images)

Candace Cable has about as much Paralympic experience and perspective on the Games as one can possibly have.

One of the pioneers of wheelchair racing, Cable won twelve Paralympic medals competing at nine Paralympic Games dating back to 1980. She has also competed in alpine and Nordic skiing at the Paralympics.

Cable worked with the U.S. delegation at Torino 2006. Here in Sochi, as in London two years ago, she is working as a journalist contributing to multiple media outlets.

"As a journalist here, especially using a wheelchair, it’s been challenging," Cable advised.

"The buses are accessible, but you can really only get one wheelchair on most of the buses," she said.

"Some of the venues are pretty good getting into, but our tribunes are terrible," Cable said. "We don’t have good visual access in the venues. The tables are high and you can’t see over the top, so at hockey you can’t see about a third of the ice."

Cable also advised that it was tricky moving around the Nordic venue as mats placed for journalists to access the competition area didn’t work for those in wheelchairs after becoming covered in snow.

She also cited other problems relating to uneven surfaces to navigate, ramps that go up on one side of a sidewalk but not on the other and temporary ramps made of wood that she believes will be removed after the Games.

"If you look around everywhere, there are little icons of a guy in a wheelchair showing that you have to pop a 'wheelie,'" Cable said. "Someone who is a quadriplegic or moves in a powered wheelchair can’t get over it. There are so many uneven surfaces where they've missed the details on."

"For Russia, this is phenomenal work that they've done as far as creating access," she said. "They've created an urban standard here in Sochi that they will start to use country-wide, but they've dropped the ball with the details."

Cable also spoke of the large crowds attending events and numerous positives of these Games for Russia.

Dutch journalist Jan Willem Buijs said he was impressed with the energy and enthusiasm at these Sochi Games as well as the legacy he believes they will leave.

"Every day the stands have been packed and the atmosphere is absolutely amazing," said Buijs, who publishes the Para Sport Report. "They beat out the Olympic Games, actually. The stands are more full now."

"I think the Russians learned a lot since they refused hosting the Games in Moscow in 1980, and the 50 billion spent is more than worth it because the perspective about people with disabilities in Russia will be changed forever," Buijs said.

Kevin Stone twice competed in the Summer Paralympics as an archer and is now covering his second Games as a journalist contributing to Disabled Sports USA, American Veteran Magazine, and Paralyzed Veterans of America.

"The weather is dynamic and the venues are unique from a Summer Games athlete perspective," Stone said about his Sochi experience thus far.

"The journalistic challenges are a little greater because of my mobility in a chair, the extra snow, and the adaptations they have made; it’s kind of sluggish and challenging when you’re by yourself.

"With all this snow and slush, being in a wheelchair, it collects in your rims, and you don’t move. You just spin."

Stone said that despite those difficulties, he has received excellent help and support from Sochi 2014 staff and volunteers.

"Everybody has assisted me and is trying to help me get the best shots," said Stone referring to his photography endeavors. "The venue managers have been excellent and their staff has assisted me in anything I possibly wanted to do."

Stone, who is attending his first Winter Paralympics, has attended cross-country skiing, curling, and the thrilling U.S-Russia sledge hockey game on Tuesday night.

"With NBC doing coverage in the States, the U.S. is finally going to be exposed and come alive, and (learn) that there is a difference between Paralympics and Special Olympics, which they always confuse," Stone said.

"This is huge; these athletes are going all out to show the world what they’re capable of and are finally going to be given their due," Stone said.

"It was evident today at Nordic skiing," Stone said. "I have never seen so much heartache, so much pain, so much elation, and so much passion when these skiers finally crossed the line. Some falling over, some dropping to their knees, and some even coming out of their prosthetics. It’s great to see."