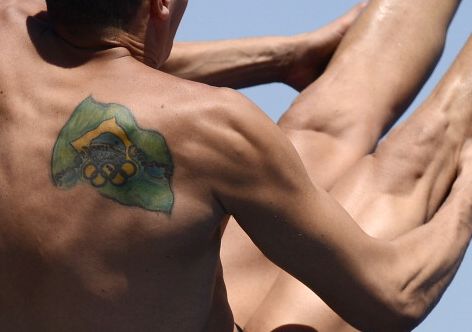 A picture shows the Brazilian flag with the Olympic Rings tatooed on the shoulder of Brazil's Cesar Castro as he competes in the men's 3-metre springboard semi-final diving event in the FINA World Championships at the Piscina Municipal de Montjuic in Barcelona on July 25, 2013. The 2016 Olympic Games will be held in Rio, Brazil. AFP PHOTO / JAVIER SORIANO (Photo credit should read JAVIER SORIANO/AFP/Getty Images)

(ATR) The host country may find itself trailing the pack on the Rio 2016 medal table.

That is according to longtime Olympic forecaster Luciano Barra, who has the Brazilians taking just five gold medals in the first edition of his medal projections for the next Summer Games.

According to Barra, that would place them in a tie with Kenya for 17th.

Their overall medal number is a little stronger. Brazil is projected to take 23 total medals overall, putting them in a tie for ninth with the Netherlands.

The United States is currently projected to take the most medals at 104, including 35 golds. China, Russia, France and Germany round out the top five in total golds.

In overall medals, the United Kingdom gets the usual bump for countries in the Olympics following a stint as host, finishing fourth with 65.

At the last Summer Olympics in London, Brazil won 17 overall medals, finishing tied for 13th overall. Their three golds put them in a five-way tie for 21st with Spain, South Africa, Ethiopia and Croatia.

One possible disappointment, according to Barra, could come from South Korea. After finishing fifth in 2012 golds with 13, the next Winter Olympic host is currently projected to win just four gold medals in Rio.

A total of 306 gold medals will be up for grabs at Rio 2016, an increase of four over the total London haul due to the additions of golf and rugby sevens.

Barra’s projections are based on the results of recent world championships and will be updated as the Games near.