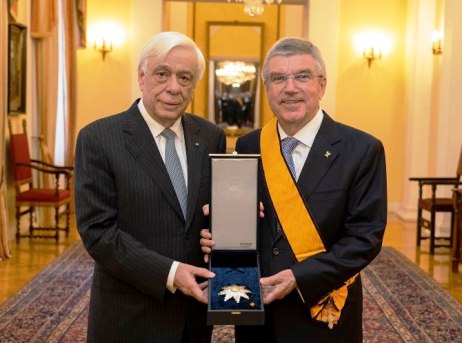 (ATR) The IOC President receives the highest order of the Hellenic Republic.

Thomas Bach was presented with the Grand Cross of the Order of the Phoenix in a ceremony at the presidential mansion in Athens Wednesday.

Hellenic Republic President Prokopis Pavlopoulos cited Bach’s "exemplary services in favor of the values and principles of the Olympic spirit and ideals".

"Under your presidency, the Olympic Games transcendently express these values and principles and are therefore aimed at all of humanity," he said.

"Your presidency of the International Olympic Committee renders a great service to the whole world and to human beings because you act for the benefit of peace, democracy and civilisation. We Greeks are historical guardians of the ancient traditions of classical Olympism, and we commend your steadfast commitment to the Olympic spirit and the ideals of Olympism. It is a commitment that you demonstrate in everything you do."

Wearing the goldsash of the order, Bach paid tribute to the primacy of Greece in the history and future of the Olympics.

"I am particularly touched to receive this distinction knowing that it is an honor that was also bestowed by the Hellenic Republic on my predecessor, the renovator of the Olympic Games, Baron Pierre de Coubertin."

The IOC President is likely to be back in Athens next March for the formalities of the Olympic flame lighting in Olympia for the 2020 Tokyo Olympics. In 2021, the IOC Session is scheduled for Athens and Olympia.