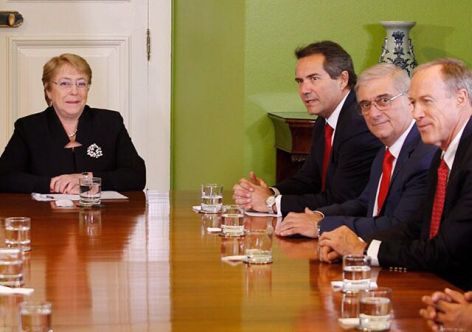 (ATR) PanamSports secretary general Ivar Sisniega tells Around the Rings the organization’s first meeting with Chilean President Michelle Bachelet is a strong sign of things to come at the Santiago 2023 Pan American Games.

"We had a very good meeting with the President of Chile, Mrs. Bachelet, a meeting in which she showed her support for the Games," Sisniega tells ATR. "It’s very clear that we’ll have a great team with the government of Chile, the government of Santiago and the Chilean Olympic Committee all working together to make great Pan American Games."

"It was a very cordial meeting with the Chilean President who gave the commission a warm welcome," Nuques tells ATR. "During the meeting, she expressed her great support for the project of the Pan American Games in Santiago in 2023."

"The President was perfect," Larsen added. "We made some exchanges and we talked about everything and it was very good. I’m very impressed by the possibility to have these Games here in Santiago in 2023."

Following the meeting with President Bachelet, organizers of the Santiago 2023 Pan Ams and city authorities presented their ideas to the PanamSports CoComm on Sept. 27. A preliminary venue tour including Chile’s National Stadium is also taking place on the second day of the commission visit.

"Santiago has great conditions to host the Games and we’re sure the legacy that will result from these Games will be a benefit to Chilean sport and also for the young people of Chile," Sisniega said. "We are looking forward to this very much."