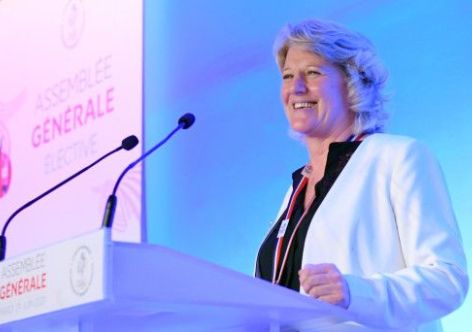 Brigitte Henriques, 50, defeated three challengers on Tuesday, garnering 57.87 percent of the vote in the first round of the election.

"I will be the spokesperson for all sports, all federations, all members of the CNOSF, in their great diversity and richness," Henriques said. She dedicated her victory to all women.

Henriques is the fifth president of the CNOSF, which was formed in 1972 by merging the French Olympic Committee and the National Sports Committee. She succeeds Denis Masseglia, who was elected in 2009 and re-elected in 2013 and 2017. Masseglia had supported her candidacy.

She will be front and center over the next three years as France and Paris prepare to host the 2024 Olympics and Paralympics.

Paris 2024 president Tony Estanguet congratulated Henriques on Twitter, adding "Looking forward to launching this new chapter and making #Paris2024 a success, while continuing to promote the place of sport in France".