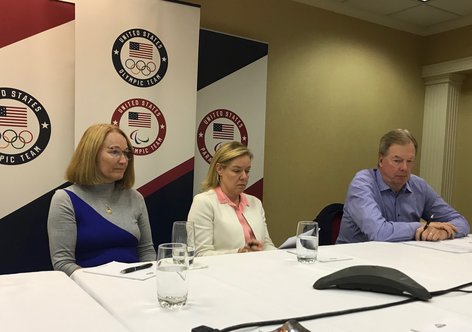 (ATR) The United States Olympic Committee says survivors who speak with Ropes & Gray in its ongoing investigation "will not prejudice any litigation now or in the future".

USOC leadership is appealing for survivors to speak with the law firm in its independent investigation into the involvement of the USOC and USA Gymnastics in reporting the sexual abuse carried out by former team doctor Larry Nassar.

In a briefing to reporters following a board of directors meeting at the U.S. Olympic Assembly in Colorado Springs, Susanne Lyons, who becomes chair in January, said it is a "grave concern" that survivor voices may not be heard in the report.

"Through the outside attorneys that are communicating with Ropes & Gray because we have no outside communication with them, we have learned that they have not really spoken with any of the survivors," Lyons said. "Without the voices of survivors we don’t really have a completely picture

The reason they haven’t been speaking with Ropes & Gray is their attorney is concerned that anything they may reveal [to the firm] may impact future litigation."

To encourage survivors to come forward current USOC chairman Larry Probst confirmed that committee lawyers have said that any interviews with the investigation won’t affect ongoing lawsuits against the USOC.

"That has been served up," Probst said. "If they agree to be interviewed by Ropes and Gray anything they say in that interview will not prejudice any litigation now or in the future."

When asked how that process would work and play out, Probst said that is up "to the lawyers to figure that out".

In a report in the Indianapolis Star last month the attorney representing the survivors expressed doubt of the investigation’s independence because of the delay in which the USOC hired the firm.

"It’s hard for me to totally throw them under the bus without seeing their product," Little said to the Star, "but history tells me when these [NGBs] hire, and the USOC hires, big law firms, the investigations are incompetent, self-serving and secret."

Lyons said that Ropes & Gray have reviewed over 1 million documents from the USOC and USA Gymnastics, but cautioned that any report without survivor testimony is incomplete.

"[The firm has] pretty good paper trail record of what has happened," Lyons adde. "We’re just hopeful that people who have information and can share this come forward."

The board meeting was held alongside the annual U.S. Olympic Assembly. The two-day meeting brings together the range of stakeholders involved with the Olympics in the U.S.

Athlete Empowerment and Safety on the Docket

Athlete safety was a recurring topic this year as well as the changes the organization is undergoing.

For the first time since 2010 a new chief executive officer, Sarah Hirshland, is leading the discussions. She started work in August, filling the role held by Scott Blackmun, who stepped down for health reasons in February after eight years in Colorado Springs..

Hirshland says the USOC is reviewing its mission statement and guiding principles. The board of directors will aim to develop a strategic plan that comes from an updated mission statement, starting in early 2019 she says.

ATTN: ugly crying alert🚨 I’m sure I’ll hate myself posting a video of me crying BUT I wanted to say a huge THANK YOU to @TeamUSA & everyone who fought, supported & made this possible for @USParalympics athletes. Now Olympic & Paralympic Games medals are worth the same #Equality pic.twitter.com/mp10MHmEbd

The growth of the U.S. Center for Safe Sport was discussed throughout the day, with chair Shellie Pfohl making numerous presentations..

Pfohl said that the center currently is in a "growth mode," and now has 24 full time investigators. The center is looking to expand to 36 investigators by the end of this year, 50 in one year.

A new, searchable centralized database of banned coaches for all sports will soon be available through the U.S. Center for Safe Sport Lyons said. The USOC is currently working with the NGBs to centralize databases, and make sure the new database can be accessed through each NGB website.

NGB Council chair Max Cobb said that the group unanimously approved to double its funding for the center to approximately $2 million. NGBs which are in the USOC’s top tier of revenue earners will now contribute a quarter of one percent of revenue to the center, as well as additional funding based on number of cases at the center. Under the new model NGBs will be capped at contributing $90,000 to the center.

Lyons said that "athletes have felt, perhaps, disenfranchised," by the umbrella organization overseeing the vast network of 50 NGBs, and that the assembly was a time for frank discussions and reconciliation. The main issues athletes have raised consistently to the USOC are dispute resolution, resources allocation and team selection.

"Athletes have felt perhaps disenfranchised and have an opportunity to see we are indeed listening and pretty much the lesson is we are provisionally happy to work with you because we believe you are listening to us," Lyon said. "We made it clear we may not always agree..but we are listening and we want to hear their concerns."

Regarding progress on a 2030 Winter Olympic bid, Probst said that Denver, Reno/Tahoe and Salt Lake City are all being consulted..

"We are discussing a process around that potential bid," Probst said. "We don’t have any details to share at this point."

Written and reported by Aaron Bauer in Colorado Springs