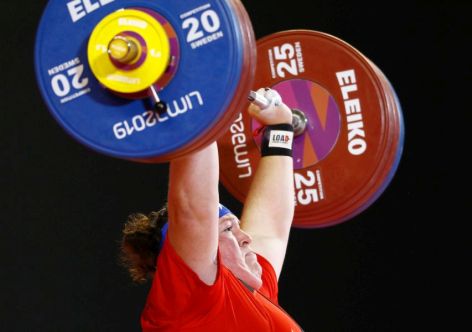 (ATR) The USA weightlifting team’s success at the Pan American Games in Lima is the result of changes both large and small.

Team USA took home five medals from Peru, punctuated by Sarah Robles winning the gold medal in the +87kg category and becoming the first American woman to become champion at the Pan American Games since 2003.

It was the most medals won by the USA since the 1999 Games.Half of the team of 10 that participated in Lima ended up on the podium.

On the women’s side, Kate Nye (76kg category) and Mattie Sasser (64kg category) both broke American records in the process of earning bronze medals.

The showing in Lima far surpasses the two medals won in the last Pan American Games in 2015 and is the fruition of years-long rebuild in how USA Weightlifting operates.

Pointing to the depth of the US team, Pan American champions Alyssa Ritchey, CJ Cummings, Jenny Arthur and Caine Wilkes did not make the trip to Lima.

Nye applauded "the changes in weightlifting domestically, such as changing the culture, creating a support performance culture, growing the sport" in comments to Around the Rings after winning her bronze medal.

"We’ve gone from frankly a definite zero in a lot of ways... our governance, our culture, our achievement on the international platform, financially to a degree, membership to a degree, certainly in the way we treated our customers, our members, our athletes, our coaches... and completely turned it around," Phil Andrews, the chief executive officer of USA Weightlifting, told ATR in Lima.

Part of the philosophy now in place is that there is nothing too small that could make a difference.

An example of this detail-oriented approach is the decision to keep the USA weightlifting team together at a luxury hotel near the venue in Lima rather than have them stay at the Pan American Village with the rest of the athletes.

The obvious drawback would be that the athletes missed out on the experience in the Village. Andrews says they took the team for a half-day visit so they could compare the two.

"They saw inside the Village and realized okay here [at the hotel] I can be very comfortable and have the food that we need as weightlifters" rather than the general food available at the Village.

The short ride to and from the venue for training and the events is also a consideration. Long bus rides are not good for a weightlifter’s legs, according to Andrews.

"We’re doing a similar thing in Tokyo, again because of geography primarily, and secondly because of accreditation. So for us it’s an opportunity to test that out before we go to Tokyo."

Given the performance by Team USA in Lima, Tokyo 2020 can’t come soon enough.