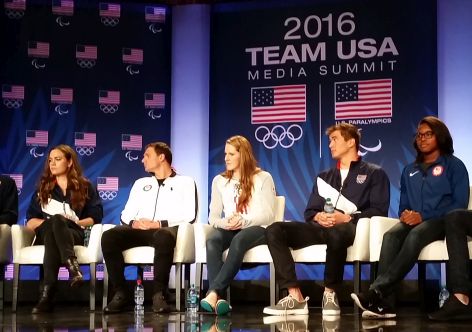 (ATR) Several Team USA athletes say that the Zika virus will not deter them from attending the Olympics in Brazil this summer.

"I think the media is making it way bigger than it seems," said women’s beach volleyball star Kerri Walsh-Jennings. "I don’t think it’s as dramatic as it’s being presented."

Walsh-Jennings is currently in Brazil with teammate April Ross competing in the FIVB Rio Grand Slam tournament. She says she’s down there with the knowledge on how to reduce the chance of contracting Zika.

"I’ve come down here armed with the knowledge with a whole bunch of essential oils and bug spray which I think is effective," she told reporters via teleconference at the Team USA Media Summit in Los Angeles.

Walsh-Jenning’s perspective on the virus is representative of many of the athlete’s at the media summit, particularly among women. Paralympic swimmer Jessica Long tells Around the Rings she’s trained too hard to let the Zika virus stop her from competing this summer.

"There are so many things at every Paralympics that are out of my control and I have been training so hard even two years ago when people weren’t really talking too much about Rio," she says. "Nothing is really going to stop me or get in the way of me getting there and competing."

Veteran Olympic swimmers Natalie Coughlin and Missy Franklin agree. Coughlin says "there are always things beyond our control at the Olympics and [Zika] is just one of them".

"We need to focus on what we do as athletes," says Franklin. "It will only take away energy if we worry about things out of our control. We will make the best out of any situation we are put in and I know Rio 2016 will do everything in their power to make us comfortable."

USOC chief executive officer Scott Blackmun says the USOC is doing everything in its power to educate and make Team USA athletes comfortable with the Rio Olympics. The USOC created an infectious disease unit with volunteer medical professionals to inform Team USA about risks and prevention techniques.

"When we appointed this infectious disease unit, two out of the three doctors are females. Women are the primary decision makers when it comes to the unborn child and the primary caretakers so we wanted to make sure women were included on the board," says Blackmun.

Some of the athletes at the media summit including golfer Lexi Thompson say they weren’t aware of the Zika issue until media members raised questions to the USOC executives.

International Paralympic Committee president Philip Craven tells ATR that Zika concerns should dissipate before the Olympics and Paralympics. Although Rio is hosting the Summer Games the events are taking place during the winter season in Brazil and mosquitoes will not be nearly as prevalent as they are currently.

"By the time the Paralympics take place in September it shouldn’t affect competition or the greatness of the Games," Craven says.