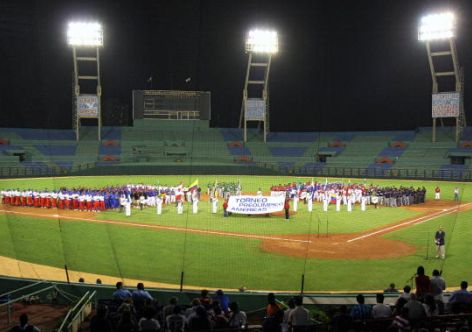 HAVANA, CUBA: General view of the inauguration of the Americas Olympic Qualifying Tournament of Baseball, 25 August 2006, at the Latin American stadium of Havana. Twelve teams of the region will participate in the tournament, which two winners will get tickets for the 2008 Pekin Olympic Games, six will get places for the 2007 World Baseball Championship in Taiwan and seven will get places for the 2007 Rio de Janeiro Pan-American Games. AFP PHOTO/Adalberto ROQUE (Photo credit should read ADALBERTO ROQUE/AFP/Getty Images)

(ATR) Major League Baseball lead attorney Dan Halem tells Around the Rings the U.S. baseball league has no plans to open an office in Havana, Cuba.

Speculation about a Havana office came following the approval of the MLB proposal by the U.S. Treasury Department that creates a new way for Cuban players to sign directly with MLB franchises. The rumors grew once President Barack Obama announced he would attend the exhibition game between the Cuban national team and the Tampa Bay Rays.

However, Halem clarified that the MLB "has not received guidance from the Bureau of Foreign Affairs as to whether our proposal to create a nonprofit formula satisfies the law of the United States," referring to the U.S. embargo of the island.

Although President Obama will be in Havana March 22, Halem is not optimistic that his presence will ease negotiations.

"Given the complexities of the issue, it will take longer to negotiate a new transfer system of players with the Cuban Baseball Federation and the MLB Players Association," Halem said.

It is unclear whether President Obama will throw out the first pitch when he attends the exhibition match.

"We have not discussed with the White House or the Cuban Federation who will throw the first pitch," Halem tells ATR. "We are honored to have President Obama present in the game and make it a part of the historic journey."

When asked about the recent defection of top Cuban baseball player Yulieski Gourriel and his brother Lourdes, Halem says the MLB "has no insight or information about the Gourriels’ decision to leave Cuba".

When the 32-year old third baseman chose to defect on Feb. 8 it was thought he could be the first Cuban player to benefit from the new proposed transfer system.

Halem says the MLB will announce the names of the players participating in the exhibition game soon.

Written by Miguel Hernández, translation and edit by Kevin Nutley