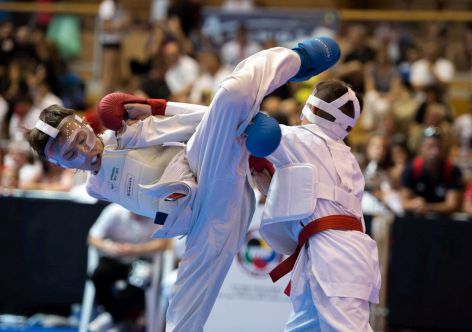 The World Karate Federation’s effort to foster growth Karate at early ages has prompted numerous examples of the increasing impact of the sport among youngsters; one last representation of the importance of youth Karate occurred this past week in Umag (Croatia), where over a thousand young athletes gathered for a massive event.

The idyllic city in Istria turned its magnificent scenery and history into the ideal setting to present the many virtues of the practice of Karate at early ages. Young Karatekas from five continents traveled to Umag to experience the WKF Youth Camp & Karate 1 Youth Cup, an event that has registered a remarkable increase in the number of participants. While nearly 700 aspiring athletes carried the flag of young Karate in the 2014 edition, and over 800 youngsters took part in the event in 2015, the tally of attendees reached 1140 young Karatekas in 2016.

"The impressive increment of participants in the 2016 edition of the WKF Youth Camp & Youth Cup is further evidence that Karate and youth go hand-in-hand," said WKF President Antonio Espinós. "Over the years we have implemented a series of actions to reaffirm Karate’s dominating position at early ages, and the remarkable impact of our sport among youngsters was clearly stated in the successful event of this past week", Mr. Espinós added.

The initiatives put into practice by the WKF represent the foundation of Karate’s appeal among children, the head of the world organisation reckons. Some of the WKF’s efforts to ensure Karate’s progress among younger participants are the creation and impulse of big events for youngsters like the WKF Youth Camp, the opening of these activities to even younger categories, and the application of adapted regulations for competitions, among many others.

In this sense, the most significant new feature of this year’s edition of the WKF Youth Camp and Cup was the inclusion of under 14 years categories in Kata and Kumite. The response was immediate and nearly 500 participants under the age of 14 attended the event in Umag.

In order to guarantee the safety of such young participants, the WKF has imposed the use of specific and homologated protections for these early ages. New protective gear for chest and the WKF Facemasks have been made mandatory in competition, thus creating and incorporating specialized protections for Karate following the European Union legislation for safety in martial arts. This new regulation showcases the WKF’s intention to further expand the sport among youngsters while safeguarding the well-being of the future stars of the discipline, the institution claims.

Two-thirds of millions of Karatekas are under 14 years-old

The WKF estimates that two out of three of Karate’s millions of practitioners around the world are under 14 years of age. When asked for the reasons for youngsters’ fascination for the sport, Mr. Espinós stated that ‘the way of the empty hand’ offers unique combination of values, magnificence and overall athleticism.

"When children go to a dojo to learn Karate, they do not only get to practice a sport modality that can drastically improve their physical condition through notable progress in their flexibility, resistance and coordination; they also learn honour, courage and self-control. They may succeed in the sport or not, but taking Karate will be a life-changing moment for all of them," declared WKF President, who himself is a Six Dan Karate black belt.

This opinion is shared by experts and Karate enthusiasts alike. "To young people who are thinking about practicing Karate I tell you: dive with your heart and soul into a world that will make you grow in all aspects of your life. To start practising Karate will be one of the most adult and greatest decisions you can make, " said Davide Benetello, Karate legend, chairman of WKF Athletes Commission and instructor in the 2016 WKF Youth Camp.

A discipline passed from parents to children

The transformative nature of the sport is one key element of the discipline and it was one determining factor of the event this past week in Umag. Large number of the participants in the WKF Youth Camp and Cup had traveled to the Croatian city together with their families, as Karate is usually passed from parents to children. While boys and girls practiced or competed during the Camp and Cup, it was common to see fathers and mothers armed with cameras capturing moments to remember while offering valuable tips to their hopeful offspring.

Tradition and familiar atmosphere – frequent features in dojos around the world – were also present in Umag. The remarkable job by the six Karate legends acting as instructors contributed to transfer this attribute to the event in the Croatian city. It also gave participants the opportunity to interact with some of the biggest heroes of the sport. The autograph and ‘selfies’ sessions with the likes of Rafael Aghayev, Douglas Brose, Rika Usami, Luca Valdesi, Davide Benetello and Predrag Stojadinov were remarkable moments for the aspiring Karatekas.

"The Training Camp was amazing. We had the chance to share many experiences with young athletes from all over the world," said instructor and World and Pan American champion Douglas Brose.

"I had a great time in Umag for the Training Camp. I hope that the next generation (of Karate athletes) gets ready to maybe participate in the Tokyo 2020 Olympic Games," stated Karate legend and former World champion Japan’s Rika Usami.

As the event finished on Sunday, participants, organisers and authorities left Umag with the feeling that the ancient history of the most popular martial art in the world and the bright future of the sport had joined together in a memorable week for the discipline. While the world of Karate looks forward to the session of the International Olympic Committee to be held in August in Rio de Janeiro where the inclusion of the sport in the program of the Tokyo 2020 Olympic Games will be decided, the WKF stated in Umag its intention to continue demonstrating Karate’s appeal among youngsters.

20 Years at #1: Your best source of news about the Olympics is www.aroundtherings.com, for subscribers only