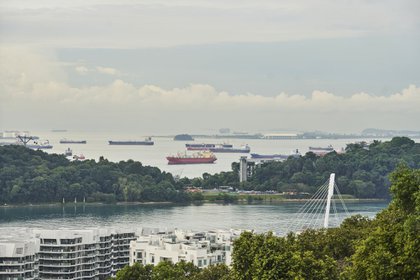 Container ships and bulk carriers offshore from Singapore, on Monday, Nov. 23, 2020. Singapore said its economy will probably expand 4% to 6% next year amid a global recovery from the worst of the coronavirus pandemic and as travel restrictions and local safety measures are eased. Photographer: Lauryn Ishak/Bloomberg

(Bloomberg) -- Covid-19 is destroying the market for supertankers that deliver about a fifth of the world’s crude oil. The result is likely to be booming trade on the beaches of Bangladesh, India and Pakistan, where obsolete ships go to get blow-torched and sold for scrap.

Last week, the 1,200-foot vessels plying the industry’s busiest trade route -- from the Middle East to Asia -- effectively had to subsidize the delivery of cargoes because of how large the surplus of ships has grown.

While the vessel glut has really been in place since when Covid-19 caused oil demand to collapse early last year, it has until recently been masked by a huge chunk of the fleet storing crude that was previously surplus to requirements. Now, with Saudi Arabia and other major producers keeping millions of barrels off the market, and consumption stronger, those stored cargoes are being snapped up again -- leaving the tankers unemployed.

“It is hard to imagine a set of circumstances that is more against tanker owners than the ones at the moment,” said Brian Gallagher, head of investor relations at Euronav NV, owner of the world’s third-largest fleet of supertankers. “When you have scrap prices at these levels that’s very attractive, it changes the dynamic for owners of older tonnage.”

That will see more of the vessels sent to the world’s scrapyards, according to multiple conversations with tanker-company executives, many of whom didn’t want to discuss publicly how challenging the market has become. Clarkson Research Services Ltd., a unit of the world’s largest shipbroker, expects about 2% of the fleet to get demolished in 2021, up from almost none for the past two years. Its forecast was made before the slump into negative rates.

The scrapping may not be enough to save the market in the coming months. The amount of oil being shipped at sea remains far below normal levels as OPEC and its allies continue to withhold huge volumes of production and vessels that were used as storage during the oil market’s mammoth 2020 glut are now coming back onto the market and looking for business.

More importantly, scrapping is typically seen as a tactic that stops the rot. It doesn’t usually drive a surge in rates. On Wednesday, daily earnings for supertankers sailing on the benchmark Middle East to China route were -$1,190, according to figures from the Baltic Exchange in London.

The Baltic’s numbers assume fixed costs for a vessel, which can be mitigated. For example fuel costs can vary and ships are able to slow down to limit their consumption. Several of the tanker owners said they were doing this when sailing back to the Middle East for cargoes.

Clarksons Platou AS, a sister company of Clarkson Research, estimates that ship speeds could now be coming down by almost 25%.

A period of relatively high shipping rates meant the number of supertankers getting demolished stayed low over the past few years. There were just two very large crude carriers, or VLCCs, scrapped last year and four in 2019. That compares with a total of 44 across 2017 and 2018, according to Clarkson Research Services Ltd. It counts a total fleet of 823 VLCCs.

The current earnings malaise will force ships that are more than 15 years old to consider heading for the break-up yards of Asia, the executives said. Every five years a vessel has to undergo a special survey that costs millions of dollars, money that’s hard to find when vessels are making a loss.

The scrap value of a VLCC currently stands at $18.95 million, according to the most recent Clarkson Research data. That’s the highest since March 2018 and could offer a further incentive to scrap.

Even so, most owners don’t expect a recovery in earnings until the second half of the year, when expectations are that oil demand will start to snap back toward pre-coronavirus levels. That should result in more volumes of crude sailing across the world’s oceans.

Until then owners have little to cheer. Some reported as many as 15 ships being offered to pick up some cargoes in the Middle East. At the moment, oil that’s stored in tanks on land is being slowly worked off by refiners. That, combined with an ever greater number of tankers returning to the market after being used to store oil at sea, means any turnaround in the tanker market won’t come overnight.

“It’s a challenging background,” said Euronav’s Gallagher. “It feels like it’s going to be challenging for a while.”