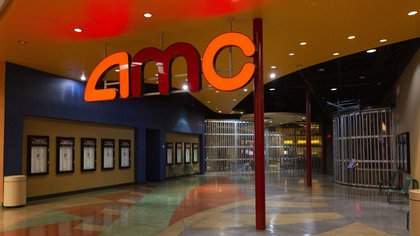 (Bloomberg) -- AMC Entertainment Holdings Inc. got support from private investment firms including Oaktree Capital Management and Centerbridge Partners for a loan that will help the cinema chain avert bankruptcy, according to people with knowledge of the situation.

Oaktree and Centerbridge, which specialize in lending to troubled companies, led firms providing the 400-million-pound loan (about $547 million) tied to AMC’s Odeon Cinemas in Europe, the people said, asking not to be identified discussing a private matter. The new loan will be used to refinance existing debt and provide liquidity to cash-strapped AMC, whose audiences have all but vanished amid the Covid-19 pandemic.

The deal is part of $917 million of funds assembled since mid-December by the world’s largest movie theater chain as it tries to stay solvent until vaccines bring back customers. Talks are underway with creditors about more financing and waivers, and while AMC said it has enough cash to stay in business through July, company filings show it still may face default claims from lenders and landlords.

“Success breeds success,” AMC Chief Executive Officer Adam Aron said in an interview Monday. “The reason bankruptcy was on the table was because people were afraid that we would run out of cash. Now that we’ve raised so much cash, bankruptcy is no longer an option.”

The 2.5-year loan will refinance a 100 million-pound revolving credit facility and provide 300 million pounds of additional liquidity, the company said Monday. Certain creditors including Silver Lake Management, majority holder of AMC’s convertible notes due 2026, would have to sign off on the new deal, and some lenders would have to continue holding off on enforcement of a leverage limit. The lenders previously granted a waiver on that requirement, which AMC has said it probably couldn’t meet.

Talks are underway with creditors to cut leverage, and one option is converting debt to equity, which would dilute current shares, the company warned. The stock nevertheless jumped as much as 39% Monday.

Even with a vaccine and increase in attendance, AMC said the virus could worsen or other strains could appear, casting more doubt on how much cash it will need. During 2020’s final quarter, AMC was burning cash at about $124 million a month.