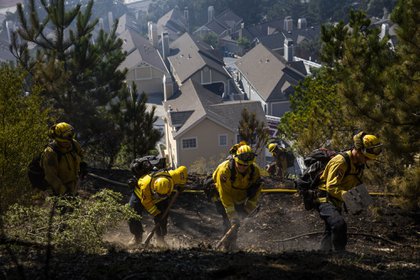 Firefighters create a fire break on a smoldering hillside during the Diamond Fire in South San Francisco, California, U.S., on Friday, Oct. 16, 2020. The punishing heat gripping California will continue into Friday as dry winds threaten to fan fires across the already charred landscape and trigger another round of power outages. Philip Pacheco/Bloomberg

(Bloomberg) -- Authorities have ordered evacuations in parts of California as a drenching storm known as an atmospheric river is poised to dump rain and snow, potentially setting off mudslides in a state that’s still recuperating from its worst-ever fire season.

More than 5 inches (13 centimeters) of rain will wash down across California’s coast, and snow will pile up in the Sierra Nevada in the first of two storms expected to hit this week, said Tony Fracasso, a forecaster with the U.S. Weather Prediction Center. Officials have urged residents in the Santa Cruz Mountains around San Jose to flee their homes.“The rain is going to be pretty heavy,” Fracasso said. “In the Sierras, there could be several feet of snow -- 100 inches over the next several days is not out of the question.”California suffered through a record-breaking fire season in 2020 that has left hillsides and mountains devoid of vegetation and primed for mudslides carrying down burned logs and other debris. A house can fill with mud within five seconds, leaving residents little time to flee once the rains start pouring down, according to the National Weather Service.Atmospheric rivers can unleash about the same amount of water that flows out of the mouth of the Mississippi River. A U.S. Army Corps of Engineers study found that such events caused 84% of flood damage across 11 western states over a 40-year period. They cost an average of $1.1 billion in damages annually.Fracasso said after this storm starts to pull away on Thursday, a second could arrive late Friday and last through the weekend.