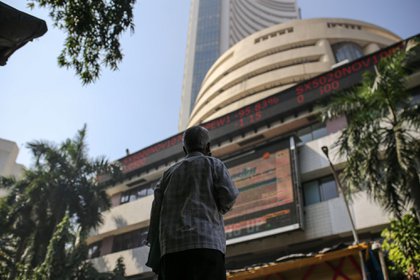 People look up at a screen and electronic ticker board outside the Bombay Stock Exchange (BSE) building in Mumbai, India, on Thursday, Jan 21, 2021. Photographer: Dhiraj Singh/Bloomberg

(Bloomberg) -- Debt sales in India’s rupee corporate bond market are likely to slow significantly this year after reaching a record in 2020, according to a Bloomberg News survey of debt arrangers.

Issuance will fall by 17% to about 7.55 trillion rupees ($103.4 billion) this year, according to the median estimate of six of the nation’s top debt arrangers. Companies have less need to build up cash buffers and the potential for higher funding costs were cited by bankers as reasons for the expected drop.

“Last year’s bond sales deluge was supported by central bank’s liquidity injections and rate cuts, which drove borrowing costs to record low levels,” said Shameek Ray, head of debt capital markets at ICICI Securities Primary Dealership Ltd. “But, liquidity will no longer be as favorable, and hence it will be a slow year for issuance.”

Economists expect India’s economy to rebound strongly from what is forecast to be the worst contraction since 1952 in the year ending March. That should ease funding pressures on companies. Still, issuers face plenty of challenges with the pandemic raging, banks less willing to lend, and the central bank recalibrating some policy supports.

The risks from the unwinding of stimulus for borrowers were highlighted this month when the Reserve Bank of India announced a step to normalize some liquidity operations. The average yield on top-rated three-year corporate notes surged by the most in more than seven years after that. Yields have fallen back somewhat since, as the central bank has reiterated its promise to ensure ample liqudity.

Corporate bond issuance in India has fallen 11% from the year-earlier period so far in 2021. India isn’t alone in seeing a slowing in some corporate debt sales, with offerings from Southeast Asian companies across all currencies also dropping year-to-date.

All six debt arrangers surveyed by Bloomberg expect bond sales in 2021 to fall below last year’s record of 9.1 trillion rupees. The survey was carried out from the end of last year to Jan. 18.

“There was a spurt in issuance last year because companies were borrowing extra to build cash buffers to insulate themselves from financial pain caused by the pandemic,” said Sandeep Bagla, chief executive officer at Trust Mutual Fund. “That need is much lower now, and hence bond sales could ease out this year.”