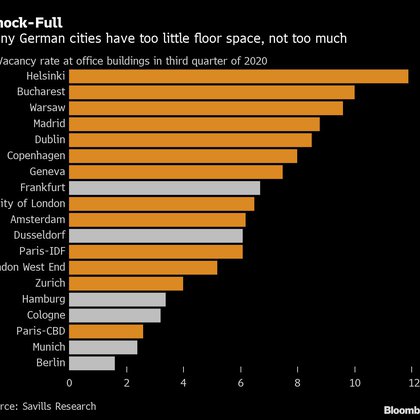 Deutsche Lufthansa AG quietly moved its 840 staff out of Frankfurt’s iconic Squaire complex over the holidays as part of a cost-cutting plan. The carrier’s departure highlighted a new challenge facing office landlords: keeping hold of tenants that have been rocked by the economic impact of the Covid-19 outbreak.

Europe’s largest economy shrank 5% last year and the pain is extending into 2021. When extensive government support runs out, more cash-strapped companies may be forced to join the likes of Lufthansa, carmakers and financial businesses in slashing jobs. And if more companies embrace home working for the long term, there could be added pressure to lower commercial rents.

“Economic crises always lead to a downturn in the office market,” said Michael Voigtlaender, an economist at the Cologne Institute for Economic Research. “This time, the recovery could take longer if more people end up working from home.”

Lufthansa’s move was the latest twist in the history of a building that has often reflected the ups and downs of Germany’s commercial-property market. When the “groundscraper” opened near Frankfurt Airport in 2011, the city was reeling from the financial crisis. About a sixth of its office space was unoccupied, and the Squaire’s then-owner was facing bankruptcy.

Then came the recovery. Over the next decade, Frankfurt rents rose by a third, drawing many of the world’s leading property investors to Germany’s business capital. One of them, South Korea’s Hana Financial Group, paid almost 1 billion euros ($1.2 billion) for the Squaire in December 2019 -- a deal that epitomized the country’s real estate boom.

The market is still thriving as negative yields on government bonds push ever more domestic capital into property. At the same time, the country’s safe-haven status is luring global investors fleeing political uncertainty in cities such as London and Hong Kong. The question is whether that can continue.

Originally developed by IVG Immobilien AG, the Squaire ran into trouble from the start. Construction costs ballooned to almost double the original budget just as the global financial crisis led to big writedowns in the value of the company’s portfolio.

After being taken over by a trio of hedge funds in 2014, IVG’s real estate unit was eventually sold to Blackstone Group Inc. for 3.3 billion euros in 2016. The Squaire was valued at about 643 million euros shortly before the deal was agreed, according to mortgage filings at the time.

By the time Blackstone sold the property three years later, the private-equity firm had put it on a much sounder financial footing. The amount of empty space dropped from 10% to just 2%, while tenants had an average of 10 years left on their leases compared with a little over four years in 2016, according to people familiar with the process. They asked not to be identified because the information was private. A spokeswoman for Blackstone declined to comment.

Now the building’s Korean owner has the task of finding a tenant to replace Lufthansa, which occupied 10,000 square meters of office space. Fortunately for Hana Financial, the airline can’t break its lease until May 2022 at the earliest. Hana couldn’t immediately comment.

The good news for the wider German market is that office vacancy levels in cities from Hamburg to Berlin are regarded by some as too low, preventing expanding companies from leasing space in prime locations. In that sense, a slight slackening of the rental market could actually prove positive.

“We’re experiencing one of the biggest economic crises since World War II,” Henning Koch, a board member of Commerz Real Estate, said in an interview. “Still, that won’t have an immediate effect on demand because vacancy rates are so low -- about 2% in Berlin or Munich. That’s not healthy.”