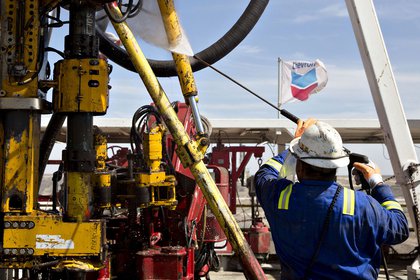 A roughneck uses a power washer to clean the drilling floor of a rig drilling for Chevron Corp. in the Permian Basin near Midland, Texas. Photographer: Daniel Acker/Bloomberg

Of the biggest U.S. oil and gas companies, EOG Resources Inc. is the least prepared for a low-carbon economy, according to BloombergNEF.

That’s based on an analysis of the company’s business-model transition risk. The overall research focuses on which companies are developing low-carbon revenue streams by investing in renewables; whether (or not) they’re expanding their fossil-fuel operations; and how threatened their current business is to the potential decline in oil demand.

EOG, the largest shale-focused independent oil company, scored the worst, partly because pure exploration and production companies face more transition risk, according to BNEF. Integrated companies tend to have stronger financial positions and a greater variety of skills that enable them to invest in and develop low-carbon businesses.

“EOG is doing nothing in areas like clean energy, hydrogen or carbon capture, as far as we can tell,” Rooze said. The company has poor scores on all its transition activities, he said.

In response to the BNEF assessment, Houston-based EOG said its long-term strategic planning process involves an analysis of “market forces that present risks and opportunities to our business plans and strategy.” The company said it has set up the EOG Sustainable Power Group to identify and implement low-emissions electricity generation to reduce its “carbon footprint with favorable economics,” including the recent startup of an eight-megawatt solar and natural gas hybrid electric power station.

Chevron Corp. is in the best position relative to its biggest U.S. competitors, such as Exxon Mobil Corp., ConocoPhillips and Occidental Petroleum Corp., according to the study. The company is exploring renewables, electric-vehicle charging and battery systems, and making some clean-energy acquisitions. Its activities in carbon capture and storage in particular rival the best in the world, Rooze said. Last week, Chevron said it’s investing in a California startup that captures carbon dioxide from factories and then converts the greenhouse gas into gravel and other building materials.

Chevron still lags far behind European rivals, including Royal Dutch Shell Plc, Total SE and Equinor ASA, in most other investment areas, Rooze said. Where Chevron is installing dozens of megawatts of renewables or EV charging points, the European companies are installing hundreds or even thousands in some cases, he said.

BloombergNEF is working with Bloomberg Intelligence (BI), both of which are research centers within Bloomberg LP, on climate transition scores for 39 major oil and gas companies. The scores are designed for investors to identify companies most threatened by accelerating global climate action and technological transformation, and to understand the material transition factors affecting the industry.

BI is focused on the companies’ current carbon performance and future targets, while BNEF examines transition risks posed by current business models and how companies are adapting their models.

It’s not all about whether a company is engaging with low-carbon technologies. For example, in the face of declining oil demand, companies are more likely to be forced to write down the value of their reserves if they’re unable to produce it competitively, or if it will take them many years to produce all of it. Meanwhile, companies like EOG that devote significant funds to high-carbon activities rather than transition to cleaner energy are actively increasing their transition risk, Rooze said.

“Setting up low-carbon businesses represents the opportunity side of the equation,” he said. “But these are still oil and gas companies and you can't measure the risks without getting to grips with that.”

Bloomberg Green publishes the Good Business newsletter every Wednesday, providing unique insights on climate-conscious investing and the frontiers of sustainability.