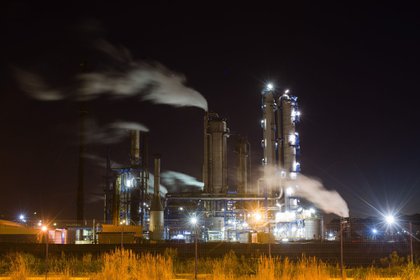 Vapors rise from the Total SE petrochemical plant at night in Le Havre, France, on Sunday, Sept. 6, 2020. President Emmanuel Macron's government last week unveiled the long-awaited 100 billion-euro ($118 billion) stimulus plan the French president is betting on to transform the economy and his political fortunes with less than two years to go until elections. Photographer: Nathan Laine/Bloomberg

(Bloomberg) -- Total SE became the first Big Oil company to quit the influential American Petroleum Institute due to a clash on climate change policy, a sign of the pressure the U.S. lobby group is likely to come under as Washington is about to again embrace the Paris climate agreement.

The move by Total is likely to increase pressure on BP Plc and Royal Dutch Shell Plc to follow suit unless the API changes its views. Both European majors said last year they planned to remain members despite highlighting some disagreements with the group, and quitting others.

The American Petroleum Institute is a staple in the corridors of power in Washington, D.C., spending heavily to wield considerable influence on how Congress and the White House regulate the energy industry. Although it has softened its views in recent years, including supporting the Paris deal, the API has traditionally lobbied against oil and gas regulation, and subsidies for electric vehicles.

Total in particular criticized the API for supporting candidates in the last U.S. elections who backed leaving the Paris agreement, according to a statement Friday. President-elect Joe Biden has said that he plans to rejoin the accord immediately after taking office.

“We welcome this decision by Total, which addresses a misalignment of interests and raises serious questions for other remaining members of the API,” said Clare Richards, senior engagement manager at the Church of England Pensions Board. “There is an urgent need for legislation that enables timely delivery of the goals of the Paris Agreement.”

The French company also cited persisting divergences with the API, including its support for the rollback of U.S. regulation on methane emissions. It also mentioned the lobby’s opposition to subsidies for electric vehicles, and “differing positions” on the principle of carbon pricing.

Europe’s second-biggest oil company last year adopted a plan to eliminate most of its carbon emissions by 2050. It has invested billions of dollars on clean energy and batteries as it diverges from its oil and gas operations.

“As part of our climate ambition made public in May 2020, we are committed to ensuring, in a transparent manner, that the industry associations of which we are a member adopt positions and messages that are aligned with those of the group in the fight against climate change,” Chief Executive Officer Patrick Pouyanne said in the statement.