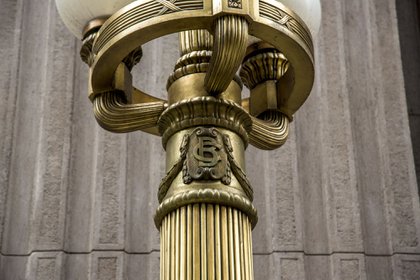 The Central Bank of Chile logo is seen on a lamppost outside the offices in downtown Santiago, Chile, on Thursday, June 28, 2018. Chile's government has a tough task -- passing a tax reform that is fiscally neutral, popular with the business community and acceptable to an opposition that pushed through corporate tax increases just four years ago.

(Bloomberg) -- Chile’s peso tumbled at the open Wednesday, dropping more than any other emerging-market currency, after the central bank announced plans to boost its international reserves.

The central bank said in a statement that it will start to replenish its reserves next week through daily purchases of $40 million at competitive auctions. The bank will buy a total of $12 billion ahead of the end of the International Monetary Fund’s Flexible Credit Line in May 2022. That will more than compensate for the $2.55 billion it spent in an intervention plan between December 2019 and January 2020.

The plan is to increase reserves to 18% of gross domestic product, the bank said.