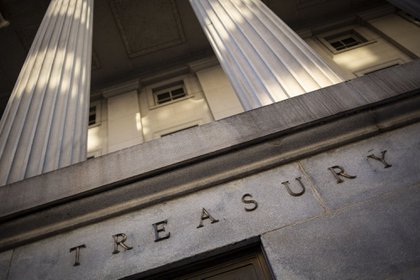 The U.S. Treasury building stands in Washington, D.C., U.S., on Thursday, April 16, 2020. President Donald Trump threatened Wednesday to try to force both houses of Congress to adjourn -- an unprecedented move that would likely raise a constitutional challenge -- so that he can make appointments to government jobs without Senate approval.

(Bloomberg) -- Rising U.S. Treasury yields made their first mark on emerging Asian currencies on Friday, with the South Korean won and Indonesia’s rupiah bearing the brunt of a stronger dollar.

The won slumped over 1% while the rupiah dropped 0.8% as the greenback strengthened against most developing Asian and Group-of-10 currencies. Treasury 10-year yields climbed to 1.10%, the highest since March.

The surge in the key global benchmark yield could temporarily halt the dollar’s recent three-month slide and undermine a rally in Asia’s risk-sensitive currencies. Regional economies that are reliant on external financing may find their currencies especially vulnerable to any sustained strength in the greenback.

“Higher U.S. yields will likely mean a temporary retracement of Asian currencies,” said Kheng Siang Ng, Asia Pacific head of fixed income at State Street Global Advisors, which oversees $3.15 trillion. “The medium term question is: is this the start of a dollar bull cycle? We generally feel that the dollar should continue to weaken, but it doesn’t mean that this is a straight line.”

The pullback in Asia’s currencies may also reflect a squeeze of dollar-short positions, analysts said. Other than the pegged Hong Kong dollar, all regional currencies rallied in the fourth quarter, with the won gaining almost 8% while the rupiah advanced about 6%.