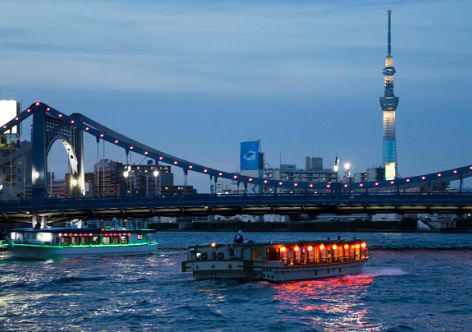 TOKYO, JAPAN - JUNE 11: Yakatabune traditional low barge style boats sail on the Sumida River as the Tokyo Skytree stands illuminated at dusk on June 11, 2016 in Tokyo, Japan. About 35 companies operate over 100 yakatabune boats in Tokyo offering services such as dinner or karaoke inside the boats while cruising in Tokyo's bay area, according to the Tokyo Yakatabune Association. (Photo by Tomohiro Ohsumi/Getty Images)

(ATR) The canoeing/rowing venue for the Tokyo 2020 Olympics has two major problems: rising costs and no consensus on how to curb them.

New reports from Japan show that the Tokyo Metropolitan Government estimates the Sea Forest Waterway venue will now cost $490 million to build. That number is in stark contrast to the $78 million cost estimate by the TMG for the venue in the 2020 bid book.

The $78 million figure was one fourth the estimate laid out by Tokyo organizers for the rowing venue in the bid for the 2016 Olympics. Four years before winning the Olympics, Tokyo presented a rowing venue in Tokyo Bay that would cost the TMG $305 million, before further costs for temporary overlay.

The venue is one of three venues the TMG has suggested be moved outside of Tokyo to reduce costs for the Games. Newly-elected Tokyo Governor Yuriko Koike commissioned an independent panel to make recommendations in her cost-cutting efforts. A newly-revised budget is expected next month from Tokyo 2020.

Coates told reporters after the meeting he is optimistic the current cost figures can be adjusted.

"The figures are very large to us," Coates said to reporters. "We can certainly reduce those numbers."

Bach, speaking to reporters at Tokyo Haneda Airport, said he preferred for the agreed venue locations to stay as is. He added that all decisions would be taken after the first budget is published.

"I think it is in the interest of Japan, Tokyo and IOC that we do not change the rules of the competition after the election," Bach said. "By respecting these principles we can very well look into the budget of Tokyo 2020 and we can look at the cost. We can see together how we can make it even more feasible."

A venue at Nagamura in Miyagi prefecture has emerged as one possible alternative for the Games. Koike visited the site on Oct. 15. After the visit, Miyagi prefecture governor Yoshihiro Murai estimated costs for Games upgrades to be in the range of $145-$200 million.

Tokyo organizers said earlier the site would cost $337 million to develop, and has inadequate accommodation and transportation options. Even as Koike looks at all possible venues, Tokyo 2020 says the best choice remains the Sea Forest Waterway venue.

Miyagi was one of the hardest hit prefectures from the March 2011 earthquake and tsunami. The region hopes hosting Olympic events could show recovery from the disaster.

In addition to the Nagamura site, Japanese media reported that organizers were considering using a site in South Korea to resolve the issue. Chungiu City hosted the 2013 World Rowing Championships and rowing during the 2014 Asian Games. Bach declined to comment on the matter.

Requests for comment on the current situation from the World Rowing Federation (FISA) were not returned. FISA President Jean-Christophe Rolland visited the Tokyo site on Oct. 3, emphasizing it was the best option for Tokyo 2020.

"I was very surprised, to hear about a possible change, and not to say more, a little bit disappointed," Rolland said. "For me, there is no doubt this is absolutely suitable for the sport of rowing."

Gifu prefecture in Japan hosted the 2005 World Rowing Championships, the only recent major international regatta hosted in Japan. The site has not been mentioned as a potential site for the 2020 Games.

In the three years since winning the 2020 Olympics, Tokyo organizers have worked to save $2 billion in rising costs of the Games. Tokyo has already completely changed plans for a new national stadium to save money, as well as moving cycling and basketball venues to Izu and Saitama. Tokyo won the 2020 Olympics on a bid that kept most venues within five miles of the Olympic Village.